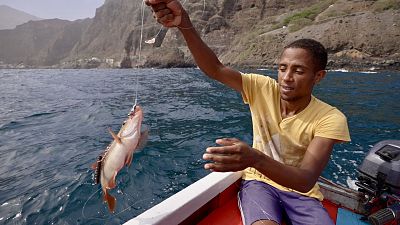 Ocean examines how international fishing agreements between the EU and other countries are helping to create jobs and healthier seas in West Africa.

"With this new boat, we can go further out at sea and catch more fish."

Pombas is a small city on Santo Antão, the western most island of the Cape Verde archipelago in the central Atlantic. The city has dozens of fishermen, and their numbers are growing as more young men enter the profession. One obstacle to fishing at sea is the need for a motorised boat.

For fisherman, Adirson Carlos Da Cruz Dos Santos, the cost of buying such a vessel was too much money. Luckily for him, the fishermen of Pombas recently got a brand new boat paid for by Cape Verde’s government. That was thanks to a partnership agreement with the European Union.

It means the younger men can go out to sea with more experienced fishermen, learning the craft while also earning a living.

“With this new boat, we can go further out to sea and catch more fish. It can be shared between many fishermen without any problem. So if someone needs a boat and doesn't have their own, they can use this one,” Adirson says.

Harnessing the power of the Sun

But the EU partnership has delivered more than just new boats. The village of Monte Trigo lies in a secluded part of Santo Antão. The nearest fish market is in the next town, half an hour away by boat.

That's a problem for the fishermen as fish goes off quickly in such a hot climate. An affordable way to preserve the catch is therefore needed.

The sun-drying method has been popular here for centuries, however the sun is also now being harnessed in other ways to keep what is caught fresh.

New solar-powered ice machines enable cold storage, meaning the villagers no longer have to rush to the market with their catch.

“This facility has really improved the lives of the fishermen. Now when they catch some fish they don’t have to bring it to the market straight-away. They can stockpile their catches for 2-3 days and then move everything in one trip — as a result they make big savings using less fuel for boat trips,” says Maria Rasa, President of Monte Trigo Fisherman's Association.

The project is just one example of hundreds that the deal with the EU has helped. In exchange for €750 000 euros in financial support, Cape Verde allows European vessels to fish in its exclusive economic zone.

The partnership has created lots of local jobs. Fish landed by a Spanish vessel at the port of Mindelo is processed at this factory. It belongs to a leading European supplier, but almost all the workers are local - 70% of them women.

"We’re processing tuna and other seafood in Cape Verde — that’s resulted in 2000 direct jobs. We are the largest exporter in the country, and fish represents more than 90 percent of all Cape Verde’s exports," says Alejandro Pazo, the Director of Africa operations for Spanish food producer Atunlo.

"I think it's a win-win situation. From the European Union we get not only a financial support, but also know-how and new technology, and from our side that they'll get to explore sustainably our fisheries resource."

This type of deal is not exclusive to Cape Verde. Known as Sustainable Fishery Partnership Agreements, these aim to restrict overfishing, putting in place scientifically established limits to protect the sea for the long term.

Carla Grijó, the EU's Ambassador in Cape Verde told Ocean: “For the European Union, these agreements are very important because they contribute to good ocean governance and to the sustainability of fisheries, as all partners know exactly what species can be fished and in what quantity. And there is also a fisheries monitoring and enforcement component that helps to combat illegal fishing.”

In Ivory Coast, illegal fishing is a deeply entrenched problem. Maxime Diomandé heads a new Fisheries monitoring centre in the country's capital Abidjan. This was made possible thanks to European funding through a Sustainable Fishery Partnership Agreement.

Using satellite technology, Maxime and his team are able to monitor in real-time all the vessels in Ivorian waters - and report any suspicious activity to inspectors.

“We have everything we need to determine the fishing activity of a vessel based on its speed, its course and also the geographical coordinates in which zone it is fishing,” Maxime says.

Efforts to combat illegal fishing in Ivory Coast are showing promising results, according the programme’s local coordinator Jacques Allou Aka. He says such activity has been significantly reduced now that infringements are routinely punished through fines:

“Ivory Coast truly benefits from this agreement - the Fisheries Monitoring Center allows us to monitor the waters, and on top of that, we have a partnership with the navy that allows us to conduct patrol missions in our exclusive economic zone. We are therefore successfully preventing pirate ships from plundering fishing stocks.”

A win-win for both partners

Most of the fish landed in the port of Abidjan is sent to Europe. It’s another reason, insist officials, for Europe to care about where fish is sourced. They say European consumers are becoming increasingly aware of their food supply and the working conditions in the countries that produce it.

Jobst von Kirchmann, EU Ambassador to Ivory Coast told Ocean: “Today, European consumers want to know the origin of the product they’re consuming. They want to know that the people who made it, or the fishermen who caught it, weren’t exploited, or that these products didn’t contribute to destroying the environment. So the European Union is acting with this in mind - because we really want to help make all the value chains sustainable, whilst satisfying consumer demand as well as playing our part to save our planet.”

Fighting illegal fishing: the deal helping to close 'the black hole in the sea'