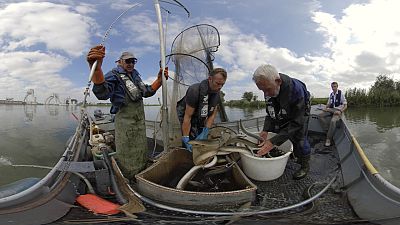 Dutch fishermen catching eels to release them in the “Eels over the Dyke” project   -   Copyright  euronews
By Denis Loctier  •  Updated: 03/05/2022

At the beginning of winter, Atlantic waves bring a new generation of eels from their spawning grounds in the Sargasso Sea to the coast of the Bay of Biscay.

Over a billion glass eels arrive there every year. Andrew Kerr is the chairman of the Sustainable Eel Group (SEG), which works across Europe to help preserve this fascinating species. He describes how the eels manage this incredible journey.

They take the shape of a leaf and float whilst twisting in the current to catch a drift across the Atlantic to go up the freshwater rivers, to put on weight. They can stay in freshwater rivers for 10 to 15 to 20 years and then they make the return journey via the Azores back to the Sargasso sea.

However, something has gone wrong. The European eel population has fallen by 90% in just a few decades.

Some tiny glass eels are captured in a controlled way at arrival. Most are then released into Europe‘s rivers and wetlands. The rest of the catches are farm-raised to commercial size.

Jérôme Gurruchaga runs an eel farming family business in southwestern France. The glass eels he buys from local fishermen mature into yellow and then silver eels, a delicacy with high market demand.

The whole sector works with SEG to make the supply chain more sustainable.

Jérôme’s facility uses the latest technologies to grow five million eels. They also use a closed circuit where they recycle the water. He says that the advantage of this is that they then don't have to use any antibiotics or pesticides.

Three-quarters of the eels consumed in Europe come from farms like Jerome's. The rest are captured in the wild.

In the Netherlands, eel dishes are a long-standing tradition. The company Spakenburg Paling BV produces more than 200 tonnes of smoked eel a year. It also supports large-scale eel recovery projects.

Its CEO, Alex Koelewijn, says that if we don't take care of nature, then we'll lose our work, our culture and our traditions of eating eel. "It's very important that companies who depend on nature have the brains to accept that nature has its limitations and take care of that", he adds.

Europe’s eel sector is concerned with the future of the species and is helping to fund scientific research, restocking and other conservation measures.

The crisis began in the 1980s when the arrival of glass eels from the Atlantic dropped alarmingly. Dutch biologist, Willem Dekker, was one of the first to notice the decline. He remembers fishing at night as a teenager and finding the sea full of eels. This is no longer the case.

According to him, the cause of the decline is not really known. It could be habitat loss, pollution of inland waters, fisheries, the introduction of a parasite or climate change. "We think it probably is a mix of these, but essentially we don't know," he explains.

Tonnes of precious glass eels are also being illegally smuggled to Asia in refrigerated containers and luggage.

After Europol busted major criminal groups in Spain and other countries, the black market was reduced to an estimated 50 tonnes of baby eels a year. However, that is still two to three times more than the whole legal European market.

Some suggest banning all eel fishing. Andrew Kerr is of the opinion that this would lead to even more poaching.

Kerr explains that between the 1980-2010 period, there was a 15 per cent decline per year. Once the Eel Regulation came into effect in 2007, by 2010 that drop started to plateau. He says that we've now had 11 years of plateau and a small increase. "So we are starting to turn the corner. However, we can't do it by fishing alone. We have to change how our freshwater is managed." he argues.

Rivers like the Frémur in northern France are vital for eel migration. Eels have evolved to overcome some natural obstacles, but today there are just too many dams and weirs in their path. Such barriers also affect the flow of rivers, increasing pollution and toxicity that weaken the eels.

Eric Feunteun is a professor of marine ecology at MNHN-Dinard. He says that Europe has 1.2 million dams. That is equivalent to one dam every 400 metres of watercourse.

To him, "All that contributes to the decline of this species that needs to migrate and live in a flow of water that is not impacted, that offers fluvial continuum from the source to the sea."

Special eel traps let scientists take accurate measurements. A study on the Frémur shows migration numbers are decreasing despite recent spikes. This is possibly due to barriers.

River barriers are often necessary to produce drinking water or generate power, but they can be mitigated by so-called 'fish passes'. Their effectiveness, however, is limited. Researchers suggest smarter measures, like the brief opening of barriers during migration peaks. Fabien Charrier a project leader at FISH-PASS believes that efforts are necessary, but unfortunately still not enough.

Hydropower plants are an important source of renewable energy, but their turbines can injure and kill mature eels heading back to the ocean to spawn.

The 'Eels over the dyke' project around the Netherlands aims to mitigate that threat. Fishermen like Frans Komen and his son, catch eels off-season to release their catch on the other side of the dyke, creating a safe passage to the sea.

To Frans, eels have been growing there for up to 30 years, "it wouldn't be morally right to allow them to get injured in this hydropower plant."

The fishermen are being paid for their work by the Dutch foundation of eel traders, farmers and fishers, and by the hydropower industry. The foundation says the released catches have grown almost sixfold since 2013, which could indicate that their efforts are not in vain and the eel stock is gradually recovering.

The positive signs are encouraging, but eel remains a critically endangered species. With its long lifespan, restoring the population will take many decades of continued effort.

As Kerr says, Europe now has a Green Deal and social, economic and environmental factors are all coming together, "what we want is a Green Deal for eel, an eel deal".