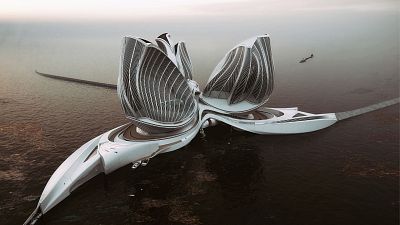 'The 8th continent' is an award-winning design that recycles ocean plastic and is completely self-sustainable.

Its five-part structure contains everything from greenhouses and living quarters to biodegradable waste collectors.

Senior designer at Zaha Hadid Architects in London, Lenka Petráková, developed the idea for her student master thesis a few years ago in Vienna, Austria, having studied ocean pollution at university.

The architect says the prototype is named after the sheer amount of plastic waste coagulating in the 'Great Pacific Garbage Patch'.

"I realised how destroyed the oceans are and how many species are extinct, how much pollution is there, and that the parts that may have never seen a human being, feel the effects of our activities," she says.

According to the International Union for Conservation of Nature (IUCN), at least 8 million tonnes of plastic end up in the sea every year. And a majority of this plastic ends up in our food and body.

On top of this, 100,000 marine mammals and turtles and 1 million sea birds are killed by plastic pollution annually.

I realised how destroyed the oceans are and how many species are extinct, how much pollution is there, and that the parts that may have never seen a human being, feel the effects of our activities.

Petráková reworked her ideas last year and the final concept scooped her the 2020 Grand Prix award for architecture and innovation of the sea, at the competition launched by Foundation Jacques Rougerie.

The designer was inspired by marine life when coming up with her project. She created the floating station to be a "living organism that is fully self-sustainable," she says.

"I was looking into marine species, animals as well as plants. And I was studying how they really interact with water environments, how they can harvest energy and how they work with nutritions, for example."

Her idea was not only to design a concept that cleans the ocean but also to restore its health.

When operational, the station could stay connected to the sea bed but remain flexible to move in line with currents. It would produce its own energy through harvesting facilities and be fully equipped with water desalination centres to maximise the health of the ocean that surrounds it.

"I believe Elon Musk would be a great patron of the project given his energy and excitement to push the technology forward and to research new territories," Petráková said recently in an interview.