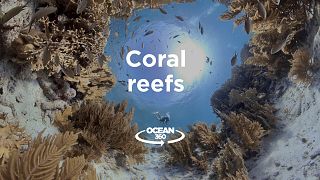 Below the bright blue surface of the Caribbean Sea lies one of the most precious treasures of our planet — its coral reefs. Globally, coral covers less than 0.1 percent of the sea floor. But it is a nursery for a quarter of known marine species and home to nearly a third of all fish. Each square kilometre of coral contains as many species in terms of diversity as mainland France - and can yield up to 15 tonnes of fish and shellfish.

But behind the beauty lurks a dark danger: coral is in deep trouble. There are many reasons why it is dying out - the warming and acidification of our oceans; unethical fishing methods; water pollution. Scientists estimate if nothing is done, 90% of the world’s tropical reefs will be gone by 2043. Nearly 500 million people who depend on coral for food, income and coastal protection could be affected.

There are potential solutions if humanity moves to address the current trend. But rapid and collective action is needed now. Coral reefs need us as much as we need them.