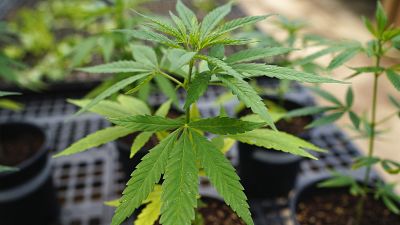 Green fields of hemp dotted across the English countryside may sound like a (trippy) dream to some. And a nightmare to others. But did you know they used to be a common sight in the nineteenth century? And they’re coming back thanks to their carbon sucking powers.

Tarred with the same brush as marijuana

To give a potted history, cannabis plants were outlawed in the UK as part of the ‘Dangerous Drugs Act’ in 1928. Hemp was lumped together with marijuana, though they contain significantly different levels of the psychoactive compound (THC) found in the drug ‘weed’.

The ban was replaced with strict government regulations in 1993. Reared plants still can’t contain more than 2 per cent THC, and growers must have an expensive £580 (€678) government-issued license.

Hemp absorbs more CO2 than it takes to cultivate.

Despite the lack of state support, more and more farmers in the UK are turning to hemp production for its economic and environmental benefits. It's legal for them to sell a variety of hemp-made products, like milk and seed powers, to supermarkets and other businesses.

In the right conditions, hemp absorbs more CO2 than it takes to cultivate - sequestering nine to 15 tonnes of CO2 per hectare. That’s almost twice as much as a forest of the same size, according to a Cambridge University researcher. Could it be the next big carbon sucker?

What do hemp farmers and traders say about the plant's potential?

A time traveller from the 1800s would be amazed at how many hemp products are now available. Everything from beard oil to snack bars contain hemp and CBD - the wonder-chemical that also sets it apart from marijuana.

CBD is extracted from the flowers of hemp. But despite the wellness boom around it, the compound can not currently be cultivated in the UK. It has to be imported. That means farmers are only allowed to harvest the stems and seeds of the plants, and must leave the leaves and flowers to drop and degrade - or burn them.

Dave Shaw is the managing director of Good Hemp in North Devon, one of the UK’s biggest suppliers. Only 10 per cent of the 1,500 metric tonnes of hemp seeds the business uses every year come from the UK. The rest is shipped in from France and Canada, he told BusinessLive this week.

"It's treated as if it's a dangerous crop when in fact it has so many environmental benefits,” he said.

As well as absorbing carbon, “hemp regenerates the soil it grows in, cleaning it of heavy metals and toxins left behind from other crops,” explains Tommy Corbyn, co-founder of the National Hemp Service.

“With that in mind, hemp is perfectly suited to restore farmland between crop rotations and the government should be incentivising farmers to do so.”

Hemp can be used in a wide variety of sustainable ways: as a source of protein in a plant-based diet, in clothing, biomass, and even in building materials like ‘hempcrete’ where it continues to sequester CO2.

“Now more than ever as a nation we need to take immediate action to address climate change, stimulate our job market and the economy. An increase in hemp farming is one way we can tackle all of those things at once,” says Corbyn.

How does the UK law compare with other European countries?

Land dedicated to hemp production grew by 75 per cent in the EU from 2015 to 2019, and the plant is embraced by some of the UK’s closest neighbours - including France and the Netherlands.

Some countries have gone further by decriminalising all cannabis plants. Last month, in a “fundamental reorientation of Luxembourg's drug policy”, the government announced that adults will be able to grow up to four cannabis plants per household for personal use. Italy is on the verge of a similar move, with a referendum set for next year.

As more farmers, from Aberdeen to Devon, turn to the hemp crops, they are hoping for just such a sea-change in the UK’s policy.

"From our perspective, sending hemp from the south to be processed in the north of England adds anything from £500 to £800 in logistics costs,” explained the Good Hemp MD. "For farmers, it's not that they don't want to grow it but they have to factor in that added 'take' in their profit margins.

"In places like France, they have established co-operatives that have shared the cost of investment in that infrastructure. What we want to see is Government policy, backed by grant funding that can establish the same thing here.”

Is cannabis growing really that great for the planet?

Growing hemp has huge potential, but of course it depends how it’s done. Outdoor farming is the most environmentally-friendly method, especially as no pesticides are needed.

But forced ‘underground’, most illegal cannabis growers do so indoors - and tend to use artificial light, sometimes from off-grid diesel and gasoline generators to keep a low profile.

“Prohibition is the root cause of the environmental impacts of cannabis agriculture,” Dr Silvaggio, an environmental sociologist and faculty member at the US-based Humboldt Institute for Interdisciplinary Marijuana Research (HIIMR), told Euronews Green last year.

“Legalisation that is coupled with environmental policy has the potential to be good for the environment,” HIIMR co-director Dr Dominic Corva said. Yet he has seen “enormous warehouses full of cannabis being grown at a scale that shouldn’t be happening,” rerouting water from rivers during drought conditions.

In some of its current forms then, industrial cannabis cultivation is doing more harm than good. But hemp is a hardy plant, and can be grown on different types of soil and in a dry climate with little need of water.

More research in the UK market is needed, and with the island becoming something of a hotspot for hemp growing, it’s high time the regulation was reviewed.

“One day I'd love to have a hemp farm in the UK that prioritises sustainability, minimises mileage, provides jobs for the community and produces our own CBD,” says Corbyn. “That's the dream.”