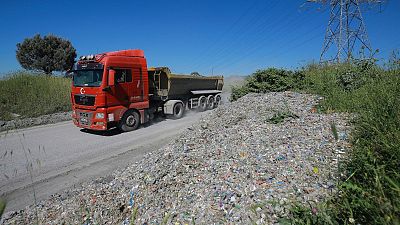 Plastic waste is a problem that looms large in the conscience of most European consumers. We’re all aware of the ubiquity of plastic products and have seen the blistering photos of plastic wastelands. But do we know how to join the dots between the two?

A new report from the Global Initiative Against Transnational Organised Crime (GITOC) has revealed the criminal undercurrent to plastic waste flows. Misdeclaration and concealment of hazardous and mixed waste, money laundering, financial crime and corruption are among the crimes committed in hauling this rubbish across the world.

Our ‘out of sight, out of mind’ approach is also allowing organised crime groups (OCGs) to profit in the dark. GITOC found evidence of polycriminal groups involved in drugs and prostitution moving into the plastic waste economy, while waste-recycling companies stand accused of involvement in human trafficking and modern slavery.

Illicit flows are only one rubbish shoot in a barrage of pollution, however. Less than 20 per cent of plastic is recycled globally. The EU produces an estimated 53 million tonnes of plastic waste every year - far more than it can process at home.

So what can be done about the plastic problem, both illegal and unjust?

What is the criminal underbelly to plastic waste?

Shipping plastic waste around the world is big business; the value of the global recycled-plastics market alone is expected to reach $50.4 billion (€44 billion) by 2022.

Little wonder then, says GITOC, that criminals are looking to capitalise on a growing business opportunity. With such long routes and plastic passing through so many hands, illicit activity can take many forms.

Brokers - third parties who connect businesses with plastic waste suppliers - are “key offenders”. They are responsible for arranging banned waste products to be sent to countries that cannot process it, explains the report, and can misdeclare the destination of shipments. Corrupt port officials play a role too.

Lumping mixed or hazardous materials in with ‘clean’ waste creates a deadly problem for receiving countries in the Global South, such as Malaysia and the Philippines. But workers are also suffering further up the supply chain, and not just from ‘white-collar’ crimes.

The firm allegedly sends plastic waste to a partner company in Turkey, where cocaine and other drugs are hidden within the waste to avoid detection, before being shipped out.

Earlier this year, one of the UK’s largest waste companies, Biffa Waste Management Service, was sued for allegations of trafficking and modern slavery by three claimants who had been smuggled from Poland to the UK. An OCG had trafficked hundreds of people to work in recycling plants, farms and factories, opening bank accounts in their victims’ names to take their wages.

Spotlighting a surprising criminal connection, a former broker told GITOC that a small London-based waste company was being used as a front for prostitution and drug trafficking. The firm allegedly sends plastic waste to a partner company in Turkey, where cocaine and other drugs are hidden within the waste to avoid detection, before being shipped out.

Where is bearing the brunt of illicit plastic waste?

A ‘domino effect’ is at work, report author Virginia Comolli tells Euronews Green. As recipient countries like China push back against the tide of waste, “illicit activities are shifted to another area where there is less awareness, less law enforcement capacity, and less political will to intervene.”

Environmental agencies and industry specialists suggest that eastern Europe, specifically Romania and Bulgaria, could be the next major dumping ground. “Romania in particular is already registering a substantial influx of plastic waste from EU countries even though it has the second-lowest recycling capacity in Europe,” the report says.

Eastern Europe, specifically Romania and Bulgaria, could be the next major dumping ground.

But Asia remains the number one destination for international flows of illicit plastic waste. Import bans in some countries on the continent are diverting flows to Laos and Myanmar, where the debate is just beginning.

For Comolli, the most shocking aspect of this issue is not the involvement of OCGs but “the massive imbalance of power” between wasteful western nations and developing countries in Africa and parts of Asia.

“These countries are faced with a catch-22 situation whereby they almost have no choice but to accept all this waste, even though they are very much aware of the environmental and human harm that comes with that,” she says.

Many of the receiving countries lack the facilities to deal with plastic waste, and it often ends up dumped or burnt - releasing toxic gases. “People live surrounded by this hazardous waste and they breathe the fumes, eat the food [contaminated with the toxins]”, says Comolli, “it’s just terrible, it’s heartbreaking really.”

What can we do to clamp down on illicit plastic waste?

Under EU law, only ‘clean plastic waste’ can be exported to countries outside the Organisation for Economic Co-operation and Development (OECD), after being authorised by both sending and receiving parties.

The European Commission is looking to tighten its rules further with a ‘major reform’ of the rules on shipments of (all) waste set for Wednesday 17 November, according to an official source.

But without stemming the tide of plastic production - and increasing Europe’s recycling capacity - it's hard to see an end to the wider problem dubbed ‘waste colonialism’.

Unfortunately, “the financial drivers behind all of this are very strong,” says Comolli. Producing virgin plastic - newly-created plastic resin - is more affordable than manufacturing with recycled materials, and financial incentives for building more recycling plants in Europe are weak.

The “purist” solution to tackling waste in the country where it is produced is currently unrealistic, she adds. But that doesn’t mean that all consumers can do is put their rubbish in the right bins and hope for the best.

As well as opting for non-plastic alternatives where possible, Comolli emphasises the real value in getting behind civil society campaigns. She points to the upswell of support for Greenpeace’s recent campaign showing British and German plastic bags smouldering on Turkish roadsides.

Turkey banned most plastic waste imports to the country as a result of public pressure.

And though a partial U-turn followed, the episode at least “serves as an example of how impactful campaigns launched by civil society can shame certain practices and therefore force governments to act.”