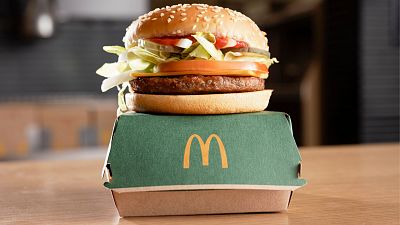 The McPlant burger launches in 250 McDonald's restaurants around the UK   -   Copyright  McDonald's
The opinions expressed in this article are those of the author and do not represent in any way the editorial position of Euronews.
By Ben Anthony Horton  •  Updated: 20/10/2021

The McPlant Burger has been launched in 250 McDonald’s outlets across the UK.

After being trialled in 10 restaurants in Coventry, British vegans were eager to get their hands on the much-anticipated plant-based burger, which the fast-food outlet hopes will appeal to “all burger lovers alike.”

The fast food giant's interest in the vegan market comes as no surprise when you look at the figures.

A record 125,000 people in the UK took the Veganuary pledge to eat only plant-based food in January 2021, according to the Guardian. This figure is up by 100,000 on last year’s numbers, and it’s double the number of people who signed up in 2019.

Better yet, a whopping 7.2 million adults now follow a meat-free diet in the UK. This figure is expected to reach 13 million by the end of the year.

And while veganism is on the rise, the correlation between meat consumption and climate change is more prevalent than ever.

Aldi's website features a message stating that cutting down on animal products demonstrates a commitment to the planet. Meanwhile, Sainsbury’s has conducted experiments with Oxford University to encourage shoppers to purchase less meat. Even McDonald’s itself - which sell over one billion pounds of beef every year in the US alone - has stated its intention to become carbon neutral by 2050.

In short, businesses are shifting their practices to accommodate the growing demand for plant-based food in an increasingly climate-conscious marketplace.

And with the global vegan meat market expected to be worth over €7 billion by 2025, McDonald’s is not the only fast-food outlet to address the lack of vegan options on its menu.

In 2021, Burger King unveiled its ‘plant-based whopper’, a vegan take on its signature hamburger. Similarly, Gregg’s has built on the success of its vegan sausage roll, introducing a vegan steak bake and a vegan sausage, bean and cheeze melt to the menu.

It was only a matter of time before McDonald’s followed suit.

That’s right, the #McPlant is here! Available in 250+ restaurants from today and nationwide from January ?

As a vegan of nearly 10 years, I was eager to get my hands on the elusive McPlant Burger, which took nearly three years of research and development to produce.

One lunchtime last week, I hesitantly joined the queue at my local restaurant in London.

It had been over five years since I last stepped foot in a McDonald’s.

Like many who follow a plant-based diet, I boycotted the fast-food outlet in a protest against its involvement in the meat-industry. I didn't agree with either the heavy toll its production processes placed on the environment or the ethics of killing over 67,000 cows per day.

I was not alone in this.

A 2019 poll revealed that over 43 per cent of vegans refuse to eat at McDonald’s, arguing that spending money at the chain “is akin to buying meat at the supermarket”.

The same intoxicating aroma of oil and potatoes permeated the air. The same hum of deep-fat fryers buzzed in my ears. The same golden arches glowed above the countertop.

I used to feel the same, but as I stood in line, I found myself overcome with the kind of excitement I experienced as a child when visiting McDonald’s for the very first time.

The same intoxicating aroma of oil and potatoes permeated the air. The same hum of deep-fat fryers buzzed in my ears. The same golden arches glowed above the countertop.

And when my order arrived, my joy didn’t end there.

The McPlant comes housed in a specially-designed box, accompanied by the traditional assortment of french fries, tomato ketchup and an optional choice of drink.

The burger consists of a plant-based patty, which McDonald’s developed alongside plant-protein specialists ‘Beyond Meat’.

It is enclosed in a traditional sesame bun, coated with a thin layer of vegan sandwich sauce, and accompanied by the familiar assortment of pickles, ketchup and mustard which have become the trademark of a traditional McDonald’s bun.

To top it all off, a layer of cheese made from pea protein is spread across the burger, which the fast-food chain promises “tastes just like our iconic cheese slices”.

The burger itself tastes as familiarly moist, salty and well-seasoned as those I had eaten as a child.

The burger itself tastes as familiarly moist, salty and well-seasoned as those I had eaten as a child. It took me back to school parties, saturday-night sleepovers and the return trip from football matches.

And while the burger itself was good, the cheese was even better.

Unlike the plastic, insipid dairy alternatives found in the discount sections of certain vegan supermarkets, the McPlant cheese boasts a gooey, piquant flavour which compliments the mellow taste of the vegan sandwich sauce.

So is it worth it?

For many meat-eaters, it is also indistinguishable in both look and taste.

Social media users have also been quick to compliment the burger, with some saying it “tastes as good as anything else at McDonalds.”

Others were less enthusiastic:

But for vegans, the fact that a plant-based burger is now readily available at fast-food outlets around the country is a cause for optimism.

“McDonald’s isn’t going anywhere fast," says Briony, 28, who has been vegan for over 9 years. “If the McPlant burger encourages more people to try a vegan alternative, that can only be a good thing.”

“Plus it just tastes great,” she smiles.

So where can I buy the McPlant?

In the UK, the McPlant burger can currently be purchased in over 250 restaurants.

McDonald’s intends to roll out the McPlant Burger nationwide from January 2022 onwards.

Meanwhile, the burger will remain available in Denmark and Sweden, where McDonald's have been testing the McPlant since the beginning of 2021.