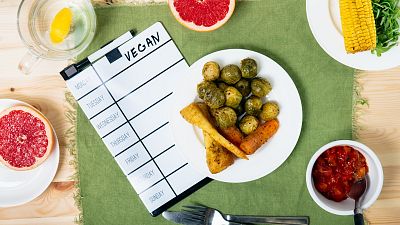 Veganism is more popular than ever in Europe with half a million people pledging to follow a plant-based diet this January.

According to Veganuary’s official numbers, 500,000 individuals have signed up to the challenge - the highest number since its launch in 2014.

Despite meat still being popular in Europe, veganism is solidifying its position. Research by food magazine Chef’s Pencil also showed that searches for vegan-related things increased with 47 per cent year-on-year in 2020.

According to the study, the most popular country for veganism globally is the United Kingdom, with Germany sliding into fifth place as the second European country on the list.

On the list of most popular cities for veganism, four out five places are held by European cities. Edinburgh ranks second behind Portland, USA, followed by the German cities of Hamburg and Berlin, and then Amsterdam in fifth.

In 2018 over half of the top ten countries with the highest share of newly launched vegan products in 2018 were in Europe.

Are farms part of the solution?

Research last year found that ditching animal products could be a vital step in improving both planetary and human health. But not everyone believes veganism is the most climate-friendly way for food.

“It’s an understandable response by millions of young people in particular to their growing unhappiness with industrialised stock production systems,” says Patrick Holden, founder and CEO of the Sustainable Food Trust.

Holden describes veganism as “almost like a protest vote”. Instead, he believes there is a counter-argument for eating meat if someone is deciding to become vegan for environmental reasons.

He argues that livestock is essential in the maintenance of land, as cows and sheep graze in the fields used to grow food. The only way to continue using the land to grow more food is to allow the animals to continue in this way.

Instead, Holden says, animal stock that is managed in a sustainable way, could play a part in the solution for those who want to eat more climate-friendly.

Sustainable farming in the EU has increased by more than 70 per cent in the last ten years.