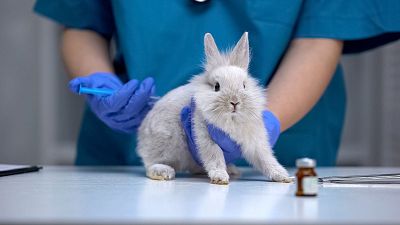 Animals have long been mistreated by the meat, dairy, fishing and entertainment industries. There has been progress in recent years, but one sector is set to continue being allowed to hurt animals, under new UK laws.

It was announced this week that the second Animal Welfare Bill (designed to protect pets and livestock) will make sure animals are transported in relative comfort: they’ll have more space, manageable temperatures and shorter journeys.

The changes come after a 12-week consultation with industry and the public, and will apply to the 1 billion animals farmed in the UK each year.

Other elements of the bill will target puppy smuggling, exporting live animals for slaughter, keeping primates as pets and zoo regulation reform.

Activists are worried that the legislation will not go far enough in stopping animal testing.

“The Animal Welfare (Kept Animals) Bill does have some very positive elements that will improve the lives of animals,” says Tod Bradbury, campaigns manager at Animal Aid.

"However, the government mustn’t forget the suffering inflicted on animals in laboratories, where millions of animals suffer and die every year in Britain.

“It must commit to a phasing out of all animal experiments, with a focus on increasing funding for human-relevant, non-animal methods,” Bradbury continues.

Recent analysis found that hundreds of cosmetics sold in the UK and EU contain ingredients that were tested on animals.

This issue arises from a conflict of legislation in the EU between a ban on animal testing and REACH, a regulation designed to protect human health.

REACH (Registration, Evaluation, Authorisation and Restriction of Chemicals) is set out by the European Chemicals Agency, and places the burden of proof on companies to ensure that any chemicals they use are safe.

REACH has resulted in many cosmetic ingredients being tested on animals as companies are often not sure which piece of legislation to comply with.

Since leaving the EU, the UK government has alleged that it will be able to improve animal welfare standards higher than in the economic bloc. However, while animal testing for cosmetics is officially banned in the UK, the government is still aligned with the European Chemicals Agency.

Many animal rights activists fear this means the UK government is leaving the door open for animal testing in some cases.

A petition by campaigners 38 Degrees to stop this has already reached 57,000 signatures.

“There is no specific justification for those tests; what we find in animal tests can’t reliably predict safety in human beings,” says Jarrod Bailey, science director at Animal Free Research UK.

“I have seen from many sources that the UK government has said this isn’t going to happen. I very much hope they mean that but the proof is in the pudding.”

Why is animal testing still going ahead?

Ingredients are tested on animals to see if they will irritate the eyes and skin of humans.

In 2018 an estimated 400,000 animals in the EU were subject to testing for botox products.

Testing often involves repeatedly rubbing chemicals into an animal's eyes or shaved skin to see if it has long term effects.

Some medical testing on animals involves pumping chemicals directly into animal’s stomachs to see if they are carcinogenic or will cause developmental problems for fetuses. These are often carried out on dogs.

In 2018 an estimated 400,000 animals in the EU were subject to testing for botox products.

“There are other ways of doing it,” says Bailey.

“Animal tests don't work and they are inhumane.

“If you’re experimenting on an animal that is stressed, it is hard to apply your findings to other animals in the wild...never mind a species jumping to human beings.”