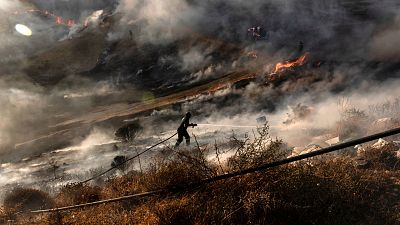 A firefighter douses the flames in an effort to contain a fire near the Kotsiatis area, on the outskirts of Cyprus' capital Nicosia.   -   Copyright  IAKOVOS HATZISTAVROU / AFP
By Rosie Frost  •  Updated: 13/08/2021

Parts of the Mediterranean and central Europe have experienced intensely high summer temperatures this year. Wildfires have caused devastation in Turkey and Greece - and now, Sicily has hit a record temperature of 48.8 degrees Celsius.

With rising temperatures across the Northern Hemisphere comes an increased risk of wildfires.

Although it is difficult to give proof that climate change directly causes these flames to spread across our forests, extreme weather and droughts undeniably make them longer and more intense. As this week's IPCC report showed, it is now 'unequivocal' that human activity has caused global warming.

Why are some European countries being affected more than others?

The countries being worst hit by the wildfires front the Mediterranean Sea. Geographically, that means they sit on the subtropical ridge. Meteorologically, that means less cloud cover so more sun exposure during the summer months. Subtropical areas are characterised by hot summers and mild winters.

Even New York City is technically a 'humid subtropical climate zone'. But because of its location between the Hudson River and Atlantic Ocean, the seasons there are much more varied - including heavy snowfall in winter.

During the summer months, residents of Europe's Mediterranean countries are warned not to light fires. There are even criminal consequences to dropping cigarette ends or having barbecues while the ground is so dry.

While the reasons behind the current fires remain largely unclear, there's no denying that they are becoming more common. In recent years the impact of forest fires on people and nature has increased across Europe. Despite efforts to minimise their impact, more than 400,000 hectares of natural areas had burnt in the EU by October 2020 - double the average over the last 12 years.

“With the risk of wildfires exacerbated by rising temperatures and increasing droughts, stronger forest protection, better prevention and faster responses are crucial.”

"With the risk of wildfires exacerbated by rising temperatures and increasing droughts, stronger forest protection, better prevention and faster responses are crucial."

These are the European countries most at risk from wildfires

So with temperatures rising across Europe, where is help needed most?

On Wednesday 11 August, Italy might have recorded Europe's highest temperature ever as Sicily hit 48.8 degrees Celsius.

Though the cause of the blazes is yet to be determined, there is a history in Sicily of fires being started over land disputes. Director of the Department of Civil Protection Salvo Cocina said that there were too many “criminals in action who take advantage of the high temperatures.”

So although climate change may not start the fires, it increases their heat and prolongs them.

The island of Cyprus is on a daily alert for forest fires and has been since June.

The worst of these was in July, when a huge fire swept across forests in the foothills of the Troodos mountains. Director of the Department of Forests, Charalambos Alexandrou described it as “the worst forest fire in the history of Cyprus”.

Columns of smoke could be seen from the capital Nicosia 75 kilometres away. Four people were killed, numerous homes destroyed and villages evacuated as strong winds fanned the flames. More than 50 square kilometres of forest and farmland were damaged, according to Cyprus’ Environment Ministry.

Extended heatwaves and drought have become more frequent in recent years, increasing the risk of fires. The region has seen very little rain since April and temperatures inland have reached 40 degrees Celsius.

President Nicos Anastasiades said it was “a very difficult day” for the country and pledged that the government would “provide immediate assistance” to victims.

After the worst heatwave in decades, wildfires are burning in all corners of Greece as the country faces a "natural disaster of unprecedented proportions".

On Monday, Greek Prime Minister Kyriakos said that firefighters were tackling 586 blazes and 63 organised evacuations had taken place over the last few days.

One of the worst hit areas is the island of Evia where fires have ripped through forests in the north of the island.

More than 800 firefighters are currently tackling the blaze including forces brought in from Ukraine, Romania, Serbia, Slovakia and Poland. Vehicles, planes, helicopters and more firefighters are also on their way from European and Middle Eastern countries.

Last week, wildfires raged near Turkey’s holiday beach destinations of Antalya and Mugla and in the surrounding countryside.

Thousands of people fled popular tourist destinations and their homes.

Russia expands state of emergency over wildfires in Far East