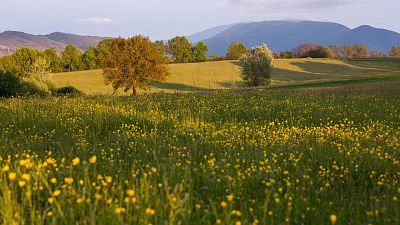 With global temperatures, sea levels and anxieties rising, governments, citizens and NGOs the world over are looking for natural solutions to climate change.

Alongside these factors is a growing awareness of a global biodiversity crisis, with two thirds of wildlife having been lost since 1970.

As a result, reforestation has become a hot topic with many people believing that it’s the best way to absorb carbon emissions from human activities.

Another concept which is on the political agenda is rewilding, letting nature ‘heal’ by stopping human interference in certain areas and encouraging biodiversity to thrive.

But what are the differences between reforesting and rewilding two things? And is tree planting on its own enough to slow down climate change?

A whole business model has grown around reforestation as a way of offsetting emissions, which often comes in the form of planting trees.

Carbon credits, as they are named, can be purchased by consumers or businesses to offset carbon produced in their professional and private lives, but some say that's not enough. Instead of function full forests, they become ‘green deserts’.

Ecologi invest in climate projects all around the world including peatland restoration in India and biogas electricity in Thailand. They also plant trees on a large scale in Madagascar, Mozambique and Nicaragua with their partners, Eden Forest.

Ellen Heimpel gives us her take on the different reforesting approaches.

“With all of our reforestation projects we use a diverse range of species,” says Heimpel, a researcher at the organisation.

“Reforestation, if it’s done responsibly, you can use lots of different species and ones native to the area but some projects can just use monocultures.”

One of Ecologi’s biggest focuses is mangrove planting in Madagascar; mangroves can absorb up to four times more carbon than other tree species and are also good at self-propagating.

“With forests - if it’s close to areas of natural seed sources and if you leave the forest where it is, it might just naturally propagate and the forest will spread.

“Reforestation works a lot better where you have land where forests used to be," Heimpel adds.

So what is rewilding?

Although Ecologi is careful to ensure they plant the right trees in the right areas, monocultures and planting trees to replace ones which have been cut down are not a 'catch all' for climate change.

“A big confusion is that when people talk about forest they think any piece of land with trees on it is a forest but it’s mostly a tree plantation,” says Frans Schepers, managing director of Rewilding Europe.

“In Europe we think a tree can maybe get to 150 years old but we have pieces still luckily where you walk under trees that are 600 700 years old. Forests can’t get mature in Europe because before that happens they are already cut by someone.”

Currently 40 per cent of Europe is covered by forest and land abandonment is contributing to natural rewilding processes. However, the view of a forest as a monolithic tree farm is an issue, according to Schepers.

Rewilding is creating a mosaic landscape of grassland, forestry and wetlands, as a better method than mere tree planting.

“You have to realise there’s so many shades of forest. We see forests much more as a dynamic thing that changes over time," he says.

For Schepers, rewilding is creating a mosaic landscape of grassland, forestry and wetlands, as a better method than mere tree planting, preferring the term 'woodland' over forest. Helping ecosystems to restore by introducing large herbivores who can create habitats for insects and other animals is one way to do this, but there are other methods too.

“It’s important that the link between biodiversity recovery and climate is now being made...they are two sides of the same coin. We say rewilding is creating the right conditions for nature to take over itself," he explains.

“If you want to transform a production forest into a more natural forest you could actually do that...by taking out non-native trees and allowing the natural trees which are often under the planted trees to grow.

“If you miss important key stone species that are playing a key role in the landscape you could bring them back or create conditions for them to come back by themselves.

“It is an intervention but only at the beginning to kickstart the system,” says Schepers.

On the face of it, it may seem as though reforesting means active tree planting and rewilding means letting nature take its course, but the two can work in congruence, and this can be financially beneficial too.

520,000 people were employed in the forestry and logging sector in 2018, providing timber and trees for oil. These monoculture forests are susceptible to wildfires and other natural disasters - while also contributing to soil degradation and stifling biodiversity.

Rewilding can help with that.

Ecologi work on ‘agroforestry’ in Scotland using wooly pigs to improve soil quality and spread seeds, and Rewilding Europe have funded a project in Portugal in which a commercial forest was rewilded.

“The idea is that you can develop business models that don’t intensify forests but actually rewild forests or make them older and more diverse,” says Schepers.

It may seem as though reforesting means active tree planting and rewilding means letting nature take its course, but the two can work in congruence.

“That would be incredible because then there is a new driver, the business model is an attempt to see if there other ways of using forests or producing timber that actually create wilder forests - or transforms plantations into more natural forests.

"If this model could work and it’s profitable then it could scale up to many other places.”

Similar projects already exist in Germany and Croatia, where it is illegal to ‘clear cut’ forests, a practice where large numbers of trees in an area are harvested at the same time.

However, Schepers is keen to emphasise the benefits of leaving trees in the ground and adding to natural processes already under way.

“We strongly believe that natural regeneration is the way to re-establish forest and forested landscapes. If you let this forest grow another 80 years it actually captures more carbon than cutting it and planting it again," he explains.

“If planting trees becomes the holy grail and a goal instead of a means to an end then people will say ok let these trees grow. The physical structure of the forest will become more diverse if you’re not just clear cutting and replanting.

Schepers says he is optimistic for the future. "From a rewilding perspective...we would like to invite the forestry sector and companies to join with us and pioneer these new ideas.”