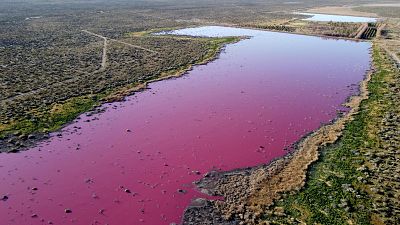 A lagoon in Argentina has turned pink and environmentalists say dumped chemical waste is to blame. The colour comes from sodium sulfite, an antibacterial product used in fish factories.

The lagoon, near the town of Trewlew and 1,400km south of Buenos Aires, receives runoff from an industrial park and has turned the colour of fuchsia before.

In recent weeks, residents living near the lagoon blocked roads used by trucks carrying processed fish waste to treatment plants on the outskirts of their city.

With the area off-limits due to the protest, authorities granted authorisation for factories to dump their waste into the Corfo lagoon.

Who is to blame?

Residents have long complained of foul smells and other environmental issues around the lagoon and the nearby river.

"The lagoon turned pink last week and remained the abnormal colour on Sunday," says Pablo Lada, an environmental activist who blames the government for the lake being polluted. "Those who should be in control are the ones who authorize the poisoning of people."

Head of Environmental Control for Chubut province, Juan Micheloud, said last week, "The reddish colour does not cause damage and will disappear in a few days."

However, Sebastian de la Vallina, Planning Secretary for the city of Trelew disagreed: "It is not possible to minimise something so serious."

Environmental engineer and virologist Federico Restrepo told AFP that this kind of fish waste should be treated before being dumped.

Dozens of foreign fishing companies operate in the area, mainly processing prawns and hake. These plants generate thousands of jobs for Chubut province, home to some 600,000 people.

"Fish processing generates work... it's true. But these are multi-million-dollar companies that don't want to pay freight to take the waste to a treatment plant that already exists in Puerto Madryn, 35 miles away, or build a plant closer," says Pablo Lada.

Watch the video above to see the pink lagoon.