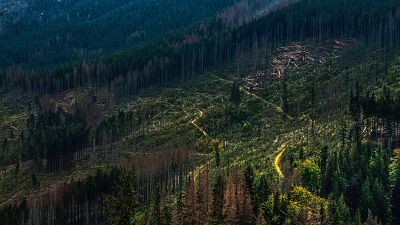 Today is Earth Overshoot Day. It marks the moment where humans have officially used more resources than the planet can generate within a year.

The date is calculated by the Global Footprint Network (GFN) by collecting data from all countries in the world to create national footprints.

The calculation hinges on the biocapacity of the Earth vs human need and use. Put simply: how many resources humans use compared to the Earth’s capacity to rebuild those resources.

2020 saw a four-week postponement of overshoot day due to a reduction in emissions because of the COVID-19 pandemic.

However in 2021 there has been a ‘rebound effect’ according to experts, with emissions increasing by 6.6 per cent, a loss of global forest biocapacity and deforestation of the Amazon contributing to the deadline shifting.

Biocapacity is measured by the amount of productive land and sea area available to provide food, energy and other amenities to a population and the ability of that area to absorb their waste.

This is weighted against technology and management practices.

National consumption is calculated by subtracting exports from imports and national production levels.

Overall the world is losing its ecological balance and entering an ecological deficit. The planet's fields, fishing grounds and forests have been exploited more so they can recover for the rest of the year from today.

Likewise carbon sinks like oceans and forests can no longer absorb the carbon we are emitting.

The history of Overshoot Day

Humans have overshot the Earth’s ability to produce resources since 1970, when the date was in December. Since then there has been a steady rolling back to our current day in July; in 1990 overshot day was in October and in the millennium year it was calculated to be in September.

It is calculated that along current trends 1.7 Earths would be needed to meet humanity’s use of resources but the disparity between nations is huge. If all countries consumed at the rate of the US for example, five Earths would be needed - whereas the Australian rate of consumption would require three and for Germany the figure is 2.9.

The size, population and natural wealth of a country contributes to its biocapacity deficit, for example Russia, Canada and Australia are all in a biocapacity credit despite engaging in fossil fuel extraction.

The #MOVETHEDATE campaign encourages people to switch to a plant-based diet and go car free.

However, the global middle class has risen from 1.8 billion in 2009 to about 3.5 billion people in 2017, and is expected to be over 5 billion by 2030 meaning consumption trends are unlikely to lower.