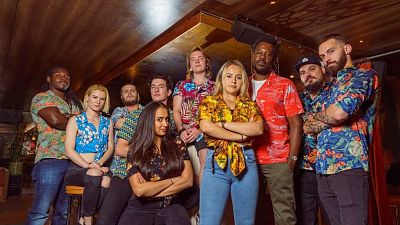 Flash floods tore through the UK on Monday 12th July causing havoc in the capital and catastrophic damage to the nation’s favourite rum lounge, Trailer Happiness.

The flooding took place a mere week before COVID-19 regulations were due to be lifted.

The UK hospitality industry has been operating under a dark cloud for the past 16-months, fighting against the onslaught of curfews, closure, scapegoating, stringent lockdown restrictions, takeaway bans, and a casualty of 660,000 jobs in 2020 alone.

UKHospitality’s research shows a loss of more than £80bn in sales in just 12-months and the permanent closure of nearly 10,000 licensed premises.

For many in the industry, “Freedom Day” (the name given to the 19th July when COVID-19 regulations are due to be lifted throughout England) is a beacon of hope towards normal trading being resumed. However, the recent heavy rains that fell on London snuffed out this light for tiki cocktail bar, Trailer Happiness.

The basement venue on Portobello Road was hit on Monday evening by flash floods. Water gushed down the stairs and through the ceiling, filling up the bar at tremendous speed. Water levels rose from  5cm to nearly half a metre in just five minutes and continued to rise above waistlines as staff frantically strove to save what they could of rare stock, equipment, and documents.

Bar Manager, Gergő Muráth, explains that “the bar suffered extensive electrical and structural damage in the flash flood, making trading impossible in the near future. Equipment, furniture, stock, and carpeting all got a major share of the destruction.”

Luckily no one was hurt but the damage caused to the newly refurbished bar was colossal.

“We're currently unable to touch anything until the insurers have assessed the damage. And every day the damage gets worse," says Trailer’s owner, Sly Augustin.

"We are looking at a pretty long road to recovery, paved with multiple insurance companies and conversations about what revenue we expected to make once restrictions were lifted on the 19th.

“There are quite a few obstacles in the way of us being able to reopen, but the industry and our friends have made the course a lot smoother than I expected.”

Over the last four days since the incident, the global rum industry and Trailer’s community of cocktail lovers have banded together to help get the bar back on its feet. So far, a GoFundMe page has been launched, exclusive limited edition enamel pins have been released, a series of takeovers across the UK are being scheduled and talks of a charity auction including some of the major players of the rum world are underway.

“There are some bars in this world that have just always seemed to have been there and are the perfect training ground for countless numbers of industry folks,” says Rum Ambassador Pete Holland. “Without Trailer, the London bar scene would be a lesser place.”

Among those who have already pledged bottles towards the charity auction is spirits distributor, Mangrove.

“Trailer Happiness is an absolute institution of the bar community both in London and internationally, it has been fundamental to the growth of the rum category for so many years and needs help now more than ever,” says spokesperson Chris Pollard.

“Trailer has always supported our brands and both Mangrove and the likes of Don Q rum from our portfolio are here to support the guys get back on their feet."

Keeping heads above the water

Many more have pledged their support and assistance via social media, with hundreds of comments and messages flooding in. The resurrection of Trailer Happiness is a long way off and by no means certain but the last year-and-a-half has proven that the hospitality industry is a resilient and tightly-bonded community that will not go down without a fight.

"After the last 16 months, it’s been so apparent that brands and bars need one another to flourish and when things like this happen the community must come together to support one of our own," adds Pollard.

Brexit’s impact on the UK’s EU workforce and the continued uncertainty surrounding COVID-19 both have huge roles to play in the future of the country’s F&B sectors.

Time will tell if the staunch support and passion of a few will manage to keep the heads of independent businesses like Trailer Happiness above water in such unchartered territories.