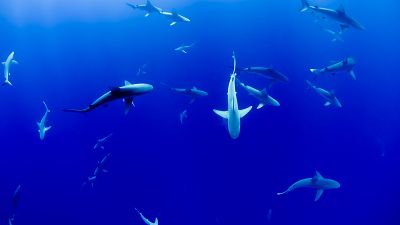 EU imports and exports account for 22 per cent of the global trade in shark meat, according to new research from WWF.

Spain was found to be the world’s top exporter sending shark meat to 85 different countries and territories, while Italy was the top importer.

The three most important bridging traders in the ray meat network are also EU members.

France, Spain and the Netherlands all act as key parts of this global network and could have a major impact on how much meat is traded or what it costs.

Up to 100 million sharks and rays are killed each year and some populations have declined by more than 95 per cent due to overfishing. More than a third of the 1,200 known ray and shark species face the threat of extinction.

“Sharks and rays are under threat,” says Dr Antonia Leroy, head of ocean policy at the WWF European Policy Office. “The EU has legal weapons to defend them, but it must keep those weapons sharp by strengthening them and enforcing them better.”

WWF says that transparency and traceability are needed from the moment the sharks or rays are caught through every stage of the supply chain. This would ensure that trade remains legal and manageable, allow consumers to make informed choices and keep endangered species out of the market.

“As the world’s largest seafood market, the EU must not be complicit in making seafood products available that are potentially pushing species to the brink of extinction,” adds Dr Leroy.

How do you know if you are eating shark or ray meat?

While fingers are frequently pointed at the demand for shark fin as a driver of overexploitation, there is a far larger ray and shark meat that is not so widely covered.

You may not even know you are eating it as meat from these animals is sometimes sold under regional names that can disguise its origin. For example, shark meat is sold as ‘saumonette’ in France, in Italy as ‘Palombo’ and ‘rock salmon’ in the UK.

“We are eating more shark and ray meat than we realize, and this is happening everywhere, including in Europe, with serious consequences for some species already at risk of extinction,” says Simon Niedermueller from WWF’s Mediterranean Marine Initiative.

“Sharks and rays are migrating more when they are dead than alive, as their meat crosses over 200 borders, with some Mediterranean and European countries playing key roles as importers and exporters, as well as consumers.“

WWF recommends asking what kind of species a fish is, how it was caught and where it has come from before you buy. When food security doesn’t depend on shark and ray products consumers should avoid buying or eating them unless they are from sustainable and traceable sources.