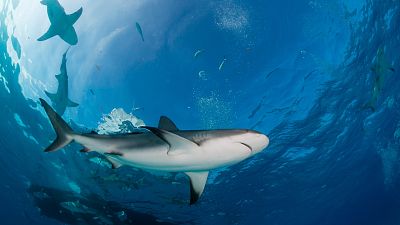 After an 11-year ban on shark fishing in the Maldives, the country has announced plans to discuss legalising the practice again.

Sharks have always been a valuable tourist attraction in the small island nation, which is one of the top destinations for diving with these marine creatures. But shark fishing was prohibited in 2010 following a reported decline in populations. This ban was put in place to protect the species from dying out.

But in a recent government u-turn, Maldives Minister of Fisheries Zaha Waheed has said discussions are taking place to decide whether legalising shark fishing would provide economic benefits. There have also been concerns around overpopulation of sharks in Maldivian waters and recent shark attacks.

“Very few countries implement shark conservation. Since it is a means to generate profit we don’t have to limit ourselves. [We can] open [shark fishing] as a manage fishery for a certain duration and fish without endangering the shark population,” she said at the Parliamentary Committee on Economic Affairs.

The top five biggest shark fishing nations in the world are Indonesia, Spain, India, Mexico and the USA, according to the Marine Stewardship Council. Sharks are harvested primarily for their meat and fins but have also been targeted for their skin, cartilage and liver.

Will shark fishing boost the economy in the Maldives?

As in the rest of the world, 2020 was a year unlike anything the Maldives has ever seen before. The unprecedented economic crisis caused by the COVID-19 pandemic has highlighted the vulnerabilities of the country’s economic model, according to the World Bank.

However, the move to consider legalising shark fishing in a bid to boost the economy has shocked marine conservationists and divers. Most believe that sharks are worth more alive than dead, so are unable to comprehend the government's strategy.

It would be a terrible retrograde move to reopen shark fishing in the Maldives just when the fruits of its success in protecting and conserving sharks have become wonderfully apparent. https://t.co/b4rwhI32AH

Indian scuba diver Kanika Mohan Saxena said that it would be "dangerous" and said "this law should not be passed".

This is recipe for distaste .Killing sharks will cause imbalance to the eco system . What is wrong with these people . They are hell bent to end the world . Messing with ecological balance is dangerous & this law should not be passed

A 2019 study into the economic benefits of shark diving in the Maldives reported that direct business revenue from shark divers was around US $14.4 million (€12.2 million). The revenue generated from associated employment and local businesses is estimated to be as much as US $55 million (€46.5 million).

Wildlife Adventurer, Steve Backshall, has spoken openly about his opposition to uncontrolled shark fishing. Becoming a Shark Trust patron in 2014, he has a great love for the creatures.

“I’ve had the great privilege of many hours underwater with sharks of various shapes and sizes. Every encounter has been a true wonder, and I have learned to not only respect, but deeply love these majestic, exciting creatures,” he says.

Backshall adds that the EU is also a global fishing power and of the 280,000 tonnes of sharks reported landed globally in 2012, the EU fleet was responsible for almost 40 per cent. That’s roughly equivalent to the weight of 21,000 double decker buses.

“My reaction to this devastation is first of all visceral and emotional. These animals have been around on the planet for over 400 million years,” he concludes.