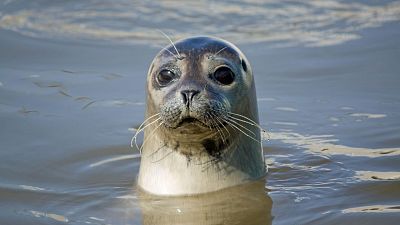 The Saimaa Ringed Seal is distinctive by its large eyes and can only be spotted in Finland’s Lake Saimaa, near Russia.

But in the remote and murky waters, it has one enemy, humans.

It is one of the world’s most endangered and rarest seal species. Due to human activity, only about 400 of these seals currently live in Lake Saimaa. They are particularly under threat due to fishing and climate change.

Campaigners say fishing for vendace, a small whitefish, is the main culprit as four to eight seal pups die annually when they are caught in the nets.

Finnish authorities have submitted a bid for the Saimaa Ringed Seal to be added to the UNESCO World Heritage List. The species are classified as ‘endangered’ by Finnish and EU authorities.

What makes this seal unique?

The Saimaa Ringed Seal is so different to other seal species because of the Ice Age.

Some 8,000 years ago the melting of the ice sheet caused the land to break the connection to the Baltic Sea. As a result, the seals became isolated in the Finnish lake. They adapted to the dim waters of Lake Saimaa and their eyes and brains grew.

Why are they under threat?

Fishing enthusiasts are also keen to protect the species from extinction. In June, 100 fishing enthusiasts signed a declaration that they would give up net fishing. But campaigners do not believe the nets will completely disappear.

"Fishing for vendace with nets is a way of life for many here," Teemu Himanen told AFP. His local association issued 980 net fishing licences last year for just one part of Saimaa.

"People are chomping at the bit to be able to start net-fishing again in July," he says, adding that many feel the threat to the seals is overstated.

But there is a simple way to avoid catching the seals, he says.

"If the net is properly anchored to the bottom, the seal can easily avoid getting caught in it, even if it eats the fish out of it," says Himanen.

Another danger faced by these wide-eyed seals is climate change. Milder winters are causing poor snow and ice conditions, which hinder the breeding season and takes away the protection of a snow hideaway for the pups.

Despite the concern and small population, this seal species is actually growing. The population decreased heavily during the 20th century, mainly due to human activity.

Due to this human intervention, the seal population went down to only about 300. Since then it has grown again by about 100, due to protective measures in place.

The Finnish government has said it wants to reach an “appropriate level of protection” before measures can be loosened, much to the annoyance of fishermen.

Campaigners say the numbers need to reach at least one or two thousand before protections can weaken.

Tourist selfies could be spreading COVID-19 to endangered gorillas