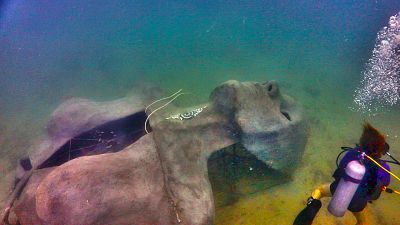 The torso of a 18 foot long woman cuts through Thailand’s crystal clear waters. A swarm of divers heave this enormous concrete structure to her final resting place, following a four month-long building project.

This is Mazu, a woman of the sea whose lips, eyes, and shoulders will soon become home to thousands of coral and fish.

Solutions to coral depletion are desperately needed. By 2030, scientists predict 90 per cent of coral reefs will be lost with current rates of degradation. These underwater ecosystems are the lifeblood of many island communities, healthy coral boosts fish and other animal populations which provide a food source for locals and ultimately jobs.

Coral is also a natural defence against coastal erosion.

A team of artists, builders, and scientists have come together to create a series of underwater sculptures in hopes of reigniting marine life.

Mazu is the first of three restoration projects from the Global Coralition and their second project, a 20 foot structure in Sosua, northern Dominican Republic, holds the world record for the tallest underwater sculpture.

“Not a lot of people put their head under the water and connect with coral reefs,” says Angeline Chen, the group’s co-founder, “We have found that art is such a powerful medium in engaging people and inviting people into this conversation.”

“Not a lot of people put their head under the water and connect with coral reefs.”

Chen and her co-founder, Kyle Block, are hoping for a hat-trick with their third sculpture. Anakaona, named after the 16th century Haitian and Dominican chief, is set to be launched later this year in the North Eastern Dominican Republic. Anakaona is a symbol of remembrance to the Taino people, who lost their lives in a massacre in which she was publicly hanged.

Chen explains the importance of involving local culture, “By using a symbol that's culturally significant to the area we're able to engage them much deeper in environmental restoration.”

Before the sculptures reach the water, there is work to be done on land.

Under the cover of a pink canopy, land-based labs house coral. Scientists cultivate the marine invertebrates here through a process of micro fragmentation: a thick coral skeleton is cut into smaller fragments of live coral tissue. This is then cleaned of mucus and the fragments are left to heal under artificial lighting. Within one week they begin to grow.

The Global Coralition labs are currently able to facilitate 8-24 tanks, with each tank capable of growing 1000 corals. Over a period of four months to a year, fully grown micro fragments can then be secured to the sculptures in a process known as reskinning the reef. Eventually the budding organisms fuse together to cover the sculptures.

Micro fragments can be secured to the sculptures in a process known as reskinning the reef. Eventually the budding organisms fuse together to cover the sculptures.

This technique is significant as labs are able to grow and recombine corals in under two years to a size which would normally take 100 years.

The Global Coralition’s lead builder, Lucille Barnard, describes additional challenges, “In terms of designing for an artificial reef, there's a lot of things to take into consideration: the wave impact of potential hurricanes, and how that sculpture can withstand those conditions and be able to survive in the ocean for hopefully hundreds and thousands of years.”

To combat this, the base of their third sculpture, Anakaona, weighs 48 tonnes.

“The sheer weight of that will make it, hopefully, nearly impossible to move,” Chen says. “We also make them hollow so that the impact of water actually passes through the sculptures.”

What are the local benefits of coral sculptures?

The human impact of these projects is vital. It is estimated that 500 million people worldwide depend on coral reefs for food, income and coastal protection.

Frank, President of the Fishermen’s Association in Playa Moron, is hoping to work with the Anakaona project.

“A normal day as a fisherman here? You cannot say how a day is normal,” Frank leans on a weathered, orange boat, “I am a fisherman but I no longer live it. I go and I get nothing.”

The waves lap at the shore beside him, “my biggest worry is that I cannot find fish.”

Frank has been fishing in the Northern Dominican Republic since he was a young boy so he has seen the impact of overfishing and climate change first hand. “It is possible that we eat too much fish, but I say it’s not that, because I can’t find any!”

“In reality I think it is plastic and no respect for the ban.”

The Dominican Republic bans the fishing and selling of certain creatures, such as lobster, at specific times of the year in hopes that populations will recuperate. “But most [people] don’t respect that,” Frank shrugs.

The Global Coralition want to help locals like Frank to adapt. They are building job opportunities in education centres that accompany the onland coral farms, as well as offering dive training. In future, divers will help maintain the underwater sculptures and take tour groups on trips.

The potential for ecotourism is particularly appealing to government backers. Hanna Bueno, cultural manager for the Ministry of Culture, is supportive. “We are a country in development, even though we have a great rate of increase in economy and infrastructure, sometimes we don't balance education. That actually is one of the major goals of this project, to educate people in what they leave behind in history,” he says.

“In 100 years, people will see that we were fighting for their culture. And of course, we can rescue at least 20 per cent or 30 per cent of the coral reef that has already been destroyed by the way we handled tourism,” adds Bueno.

One contradiction to the Global Coralition’s mission weighs heavy on its conscience; sculptures are fleshed out with a grey mould of concrete.

Annually, around 8 per cent of global CO2 emissions can be attributed to cement production, according to think tank Chatham House. This is largely due to the thermal combustion and chemical processes involved in making the material.

“There's a lot of room for improvement in this space, for sure,” Chen sighs.

The team considered using ceramic, but it has a reputation for cracking over time. Hempcrete, a mixture of hemp and lime binder, was also on the cards but has similar issues with breakage. In the future, 3D printing could offer a lower carbon solution, but the technology is not yet viable for projects of this size.

“We will keep looking [for alternative materials], as the projects develop,” Barnard adds, “but for now it's the most sensible material.”

Angeline suggests that their project contributes to a greater good. “We will build usually one large signature sculpture. That is our awareness piece. With the amount that we use, the benefits outweigh the footprint of the concrete used.”

“The real argument against concrete should be around how it's used in the construction industry.”

Turning the tide on poverty

The Dominican Republic has a national poverty rate of 14.2 per cent.

It is widely acknowledged that poor populations are disproportionately impacted by climate change. Ecotourism from coral restoration could help alleviate poverty there and make the country better prepared to mitigate environmental challenges.

“There's an exciting future where these communities that live near reefs can really thrive with the prosperity of the ocean,” Chen beams. “They have depended on the ocean for generations and the ocean has always provided for them.”

Now these underwater sculptures are giving back.