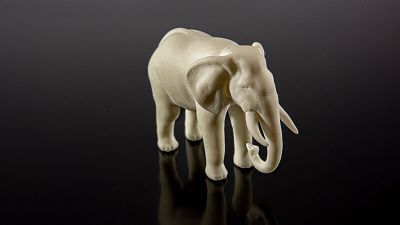 Restoration can save a lot more than just historic ornaments.

What has been developed as a high-quality ivory alternative to restore art could also lower the demand for real ivory and save elephants from poachers.

For centuries, ivory was often used to make fine art objects as a symbol of chastity and virtue. But art restorers have been left with a tiny amount of ivory after the Convention on International Trade in Endangered Species (CITES) secured a ban on the international trade of ivory in 1989.

How art can contribute to nature conservation

Historian Richard Addison, known for his ethical restoration practices, found himself without sufficient material when he started working in an intricate 17th century Venetian Vitrine which belongs to the Archdiocese of Vienna, Austria. The historic art piece originally had 24 decorative columns, partially made of ivory.

He needed to replace 18 of those which had been lost over time. Carving ivory would have been a very expensive solution, thrown off the table as an ethically questionable practice anyway.

"As 3D printing is increasingly applied in restoration, I approached the Technical University of Vienna with this dilemma and was fortunate to be introduced to Prof. Jürgen Stampfl who enthusiastically set the ball rolling and gathered a team together to embrace the challenge," says Mr Addison to Euronews Green.

The university teamed up with 3D printing company Cubicure GmbH and have come up with an elephant-friendly ivory alternative, named 'Digory'. The new material is made of synthetic resin and calcium phosphate particles. The technology makes it possible to restore old art objects with great precision in a short period of time.

"It is very similar in its properties to ivory and with careful ageing and polishing by the restorer, it provides a huge step forward for the restoration profession whilst protecting the elephant population of the world," says Mr Addison.

One step from extinction

Although the rapidly shrinking population triggered the international ban on ivory trade in the 80s, there are still tens of thousands of elephants killed every year to meet the demand for ivory around the world.

Part of the problem is that domestic trade has not been banned in a number of countries, such as the UK and Japan, however, China put an end to it in 2018.

Elephant populations have been decimated so much that the African Forest Elephant is one step from extinction. This species is signalled 'critically endangered' on the IUCN Red List of Threatened Species and the African Savannah Elephant is marked 'endangered'.

While ivory products, ornaments and jewellery can be easily produced by using the recent 3D printing technology, it remains to be seen if the demand for ivory as a status symbol and spiritual object is going to cease in order to save these animals.

Click on the video above to learn more about the 3D printed ivory replacement.