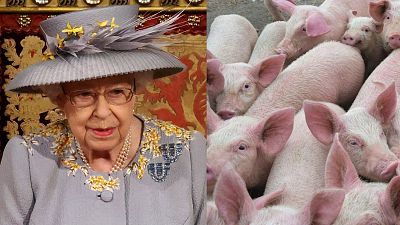 Her Majesty The Queen was joined today by various members of parliament in the UK House of Lords, in her first public appearance since the funeral of her husband Prince Phillip.

While pandemic recovery measures remained the focus of the thirty new laws, animal rights activists were cautiously optimistic that she would announce new animal protection policies.

The speech comes after several unfulfilled animal rights pledges from the manifesto Prime Minister Boris Johnson won the election on in 2019.

The Queen confirmed laws will be brought forward to “ensure the UK has, and promotes, the highest standards of animal welfare.”

The UK government is introducing legislation on the following:

Since the UK’s departure from the EU there have been no provisions carried over that recognise animal sentience - the acknowledgement that animals can feel emotions and should be protected from pain, injury and disease.

This is enshrined in the Lisbon Treaty 2009 which says animals mustn’t be treated as “goods” and “full regard must be given to their welfare”.

Former British Prime Minister Theresa May decided not to retain this legislative measure as part of her premierships’s Brexit negotiations. There have since been three attempts to get the issue back on the agenda to no avail.

He told the Telegraph the Animal Sentience Bill will apply to “vertebrate animals - anything with a spinal cord”.

100,000's of you joined us to call for UK animals to be recognised as sentient beings, who can feel pain & joy, after this protection was lost.

Eustice has previously said a ban on sending animals abroad for fattening and slaughter could be in force by the end of this year. Before Brexit, the High Court had historically prevented the advancement of this legislation, citing a breach of EU free trade rules.

Farmers across the country have entered an eight-week consultation period with the government to establish the ramifications this might have on their exports.

The Royal Society for the Prevention of Cruelty to Animals (RSPCA) has praised a development of this kind, calling it "a landmark achievement for animal welfare".

"Legislation will also be brought forward to ensure the United Kingdom has, and promotes, the highest standards of animal welfare." Huge thanks to Her Majesty The Queen for highlighting government's intention to improve UK animal welfare. More details in next 24hrs. #QueensSpeechpic.twitter.com/o7Ppm2QZxl

In 2020 the RSPCA investigated almost 100,000 individual cases of animal cruelty in the UK. A little over 1,000 convictions are secured for these offences each year.

Many Brits are unaware that the maximum sentence for animal cruelty currently stands at one year - one of the lowest in Europe. New laws will bolster that up to five years with the potential to enforce unlimited penalties on offenders.

The bill is expected to come into force in June 2021.