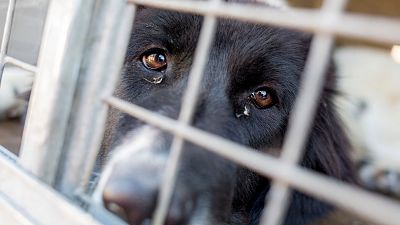 Switzerland could become the first country in the world to completely ban animal testing if a referendum held this Sunday receives enough support.

Around 80 organisations back up the citizens’ initiative which animal rights activists say is long overdue.

"Animals should not suffer for the sake of humans, it's simple," says Renato Werndli, a doctor from northeast Switzerland who launched the referendum under the Swiss system of direct democracy.

"Our opponents have said it is necessary for scientific reasons, but we have spoken to the people who develop research methods, and they have come to a completely different conclusion."

But the Swiss government and the country’s strong pharmaceutical industry are very much against the ban.

Researchers warn that a ban on animal testing - which would be binding - could prevent the development of new drugs and hinder future medical research in Switzerland.

They also argue that animal testing is already tightly regulated under a legislation passed in 2008. This obliges scientists to prove that there’s no other alternative to experimenting on animals and that such testing isn’t cruel.

"I think there are people who think all animal experiments are unnecessary," says Maries van den Broek, Vice Dean for research at the University of Zurich.

She believes that the questions scientists answering using animal testing help them to make progress in medical research. Van den Broek also claims that there’s no cruelty involved in animal testing in the country.

"We have very strict regulations on how to treat an animal," she explains.

"We are very certain that we avoid pain and stress as much as possible. We certainly do not torture the mice, and we have certain ways of killing them that's like putting them to sleep, as your vet would do with your pets. So, this is absolutely not cruel."

The ban subjected to the people’s vote on Sunday includes testing on humans too, and scientists argue that goes one step too far.

"It would be like putting on the handbrake, a complete halt in fact to many fields of research in our country," says Samia Hurst, bioethicist at the University of Geneva.

"But it would put an end to this research only in Switzerland," she added.

How widespread is animal testing in Switzerland?

The number of experiments conducted on animals in Switzerland has been steadily decreasing in recent years, data from the country shows. From nearly two million in the early 1980s, the number has now plunged to an average of 600,000 every year.

Most experiments in the country are carried out by businesses and universities.

Is Switzerland likely to introduce the ban?

Swiss voters have already been called three times to decide on the issue. The first time in 1985 70 per cent of people were against it, in 1992, when 56 per cent were against, and then again in 1993, when 72 per cent opposed the ban.

And measures of public opinion suggest that the ban is not likely to pass this time either. According to the latest polls, only 26 per cent of Swiss people are in favour of putting an end to animal testing.

This region of Switzerland wants to give primates fundamental rights

200 million to be displaced by storms - what will happen in Europe?