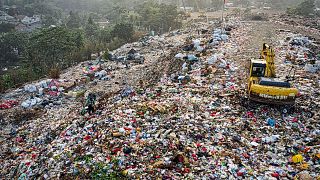 The UK continues to export plastic waste to countries which can't properly treat it   -   Copyright  Getty via Canva
By Laura Sanders  •  Updated: 18/01/2021

Post-Brexit Britain will continue to use the Global South as its dumping ground for unsorted plastic waste, despite the EU banning the practice.

On 1 January 2021, an EU law preventing unsorted and contaminated plastic waste being shipped to non-OECD countries came into force. But the UK, now separated from the EU and its laws, has fallen short of expectations by failing to adopt equally rigorous policies.

Environmental campaigners have accused the UK government of going back on promises made in the 2019 Conservative Party manifesto. The political party, which is currently in power in the UK, said it would push the country to “lead the world in tackling plastics pollution” and “ban the export of plastic waste to non-OECD countries.”

The UK is the world’s second largest exporter of plastic waste, sending around two thirds of it to developing countries. In 2020, the month of September alone saw 6,896 metric tonnes exported from the UK to countries such as Malaysia, Pakistan, Vietnam, and Indonesia, according to the Basel Action Network (BAN).

These countries don’t have the capacity or facilities to properly manage the waste, which means most of it is burned or buried. This has knock-on effects for local communities.

"Our government promised to maintain or exceed EU environmental standards after Brexit,” says Sam Chetan-Welsh, Greenpeace political campaigner. “But creating a loophole to allow the dumping of our plastic trash on environments and communities bodes very badly. This is not leadership, it's failing to do the bare minimum."

“This is not leadership, it's failing to do the bare minimum."

What ‘loophole’ allows the UK to continue exporting plastic waste?

Rather than banning this unsorted plastic waste from leaving the country in the first place, the UK now operates on a “prior informed consent” policy. This means the importing countries have to either accept or refuse the waste, leaving the decision up to them.

BAN executive director, Jim Puckett, insists that the UK was aware of the EU’s plans to prohibit the export of mixed and contaminated plastic from as early as April 2019. He doesn’t understand why the UK couldn’t achieve the same by January 2021.

"The UK has had almost two years to transpose the EU plastic waste export ban into UK law," says Puckett.

"We had assumed the UK would at least follow the EU, and so it is a shock to find out now that instead, they chose to have a far weaker control procedure which can still permit exports of contaminated and difficult to recycle plastics to developing countries all over the world," he adds.

Too little too late?

A spokesperson from the UK’s Department for Environment, Food and Rural Affairs (DEFRA) insists they are committed to tackling plastic pollution:

“The UK government is a global leader in tackling plastic pollution and is committed to clamping down on illegal waste exports.

“We have pledged to ban the export of all plastic waste to non-OECD countries and to introduce tougher controls on waste exports, including mandatory electronic waste tracking which will make it harder for criminals to obtain and export waste illegally.”

But Luke Pollard, shadow secretary for the environment, food and rural affairs, believes the British people expect the government to act on “big promises” to match environmental standards set by the EU. And, he adds, they expect it to be done quickly.

“The British people expect to see these exports banned, more recycling of materials at home and faster action on the climate crisis. It is up to ministers to deliver on their promises and fast, but this does not look good.”

A harrowing study by Indonesian NGO, Nexus3, has proven that microplastics are making their way into the food chain in Indonesia due to plastic pollution.

"In Indonesia, we have documented large amounts of imported UK plastic wastes dumped and burned in the farming communities by the substandard recyclers which can only actually recycle a small percentage of the waste,” explains Yuyun Ismawati, an activist from the Nexus3 Foundation.

He says that it is “disturbing” to see the UK continuing to export its plastic waste and “using developing countries as dumping grounds”.