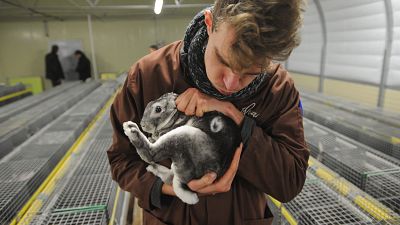 From Judi Dench to Ricky Gervais, 50 of Britain’s biggest celebrities have signed a letter calling for a ban on the sale of real animal fur in the UK, alongside a petition from the public.

While the country put an end to fur farming almost two decades ago in 2003, this hasn’t stopped it being imported from abroad. Finland, France and Poland are among the main exporters in Europe but a substantial amount also comes from China.

Since 2003, £800 million (€928 million) worth of fur has come into Britain from countries where animals experience suffering and distress on fur farms.

The #FurFreeBritain campaign is being led by animal protection organisation Humane Society International, alongside PETA, the RSPCA and Four Paws UK. The groups are hopeful that a ban is achievable in 2021 now that the Brexit transition is complete.

"Banning the sale of fur in the UK doesn't even require debate, it's a no brainer,” says Ricky Gervais.

What is the government’s response?

“Fur farming has rightly been banned in this country for nearly 20 years and at the end of the transition period we will be able to properly consider steps to raise our standards still further,” stated UK Department for Environment, Food and Rural Affairs (Defra) minister Lord Goldsmith.

He added that this is something the government was “very keen to do.”

72% of Brits support a ban on the sale of fur and 93% of the population reject wearing fur altogether.

The letter from animal rights groups claims that 72 per cent of Brits support a ban on the sale of fur and 93 per cent of the population reject wearing fur altogether.

“Subjecting foxes, mink, raccoon dogs and other animals to the endless monotony of life in a tiny, barren metal cage, only to be gassed or electrocuted to death for frivolous fashion, is totally unacceptable,” it reads.

Fur farming is described as a “cruel and outdated trade that has no place in any civilised society in the 21st century”.

Major celebrities involved in the campaign include Gary Lineker, Thandie Newton, James Arthur, Leona Lewis, Joanna Lumley, Imelda Staunton, Judi Dench and Ricky Gervais, who all support the “compassionate decision” to end the sale of fur in the UK.

What are the laws in other countries?

More than 100 million animals are killed for their fur every year worldwide, including mink, fox, raccoon dog, chinchilla and rabbit - that’s equal to three animals dying every second, just for fur.

Most recently, the government in Hungary declared a ban on the farming of animals for fur including mink and foxes.

France has also committed to phase out mink farms by 2025, and the Irish government made a commitment to bring forward legislation in 2021.

Bulgaria, Estonia, Lithuania, Montenegro, Poland and Ukraine are currently considering bans on fur farming, and in Finland the majority party of the coalition government just announced its support for a ban on fur farms.

In the US, California became the first US state to ban fur sales in 2019 following similar bans in cities like Los Angeles and San Francisco. A bill introduced in Washington would ban the production of fur altogether.