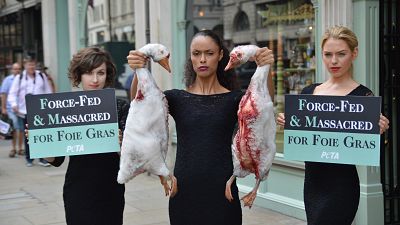 One of my favourite films growing up was Beverly Hills Cop. I knew it almost entirely by heart. Never did I imagine that I would become another of Victor Maitland’s “victims”, but fast forward 20 years, and there I was, being “force-fed” by the actor who played him, Steven Berkoff, outside of Fortnum & Mason – one of the UK most iconic department stores.

Why? I was there to protest against the sale of cruelly produced foie gras.

Skip ahead another ten years and, finally, the retailer announced the removal of this torture-in-a-tin from its shelves, following one of PETA’s longest-running campaigns. Although it took far too long, we’re thrilled that the penny finally dropped and that Fortnum & Mason has joined the extensive list of department stores and supermarket chains to have banned foie gras.

Now, it’s time for governments on both sides of the Channel to put a stop to the barbaric industry altogether.

The truth behind foie gras production

Without a shadow of a doubt, foie gras production is one of the cruellest things animals undergo on factory farms today. It is one of very few products made by intentionally inducing a painful, debilitating illness in healthy young animals.

Pipes are shoved down the throats of ducks and geese three times daily and almost two kilograms of grain per day is pumped into their stomachs. The equivalent for humans would be if we were made to eat 20 kilograms of pasta a day. The force-feeding process causes the birds’ livers to swell up to 10 times their normal size. At this point, many birds can barely breathe and constantly gasp for air.

According to veterinarian Dr Holly Cheever of the Humane Society Veterinary Medical Association, “due to the enormous size of the livers … the birds have no room for their air sacs to fill with oxygen … analogous to feeling as if one is smothering.”

A PETA investigation, narrated by the late, great Sir Roger Moore – whose Bond nemesis in Octopussy was played by Berkoff, incidentally, – documented horrific cruelty at French foie gras farms with supposedly some of the highest levels of animal welfare in the world. Geese were filmed with blood dripping from open wounds as they stood on metal grates, and birds who were too sick and debilitated even to support their own bodyweight were not spared the horror of the farmer’s force-feeding machine.

Other PETA foie gras exposés have revealed that feeding pipes left some birds so badly injured that they had holes in their necks.

What are the current laws on the sale of foie gras?

The whole force-feeding process is so cruel that it is rightly illegal in the UK under The Welfare of Farmed Animals (England) Regulations 2007, and many British institutions, including both houses of Parliament, have banished it from their menus.

While logic would dictate that a product too cruel to produce here should also be too cruel to sell, animal protection groups are told that EU trade laws would prohibit such a ban.

The scientific consensus around the world is that foie gras production is inhumane.

Brexit, however, has changed things, and we can now demand that the UK government align its actions with British principles by banning the import and sale of foie gras – a move that would be supported by 79 per cent of Brits.

Of course, it’s not just the British constitution this sadistic product offends. The scientific consensus around the world is that foie gras production is inhumane. Even the EU’s own Scientific Committee on Animal Health and Animal Welfare has condemned force-feeding as detrimental to the welfare of birds, and the Food and Agriculture Organisation of the United Nations has stated that force-feeding is not a practice that it condones.

The process termed ‘gavage’ is actually banned in the EU under Article three of the European Convention for the Protection of Animals Kept for Farming Purposes, save for in five countries, including France, that have been granted an exemption. This is much to the outrage of the over 50 per cent of French people who want to see force-feeding banned.

Ending the vile industry wouldn’t just be in the interests of the approximately 40 million sensitive, intelligent ducks and geese deliberately made ill for foie gras each year in the EU, or the many EU member states allowing imports. It would benefit all of us by reducing the very real danger the industry poses of being ground zero for the next global pandemic.

As I write, France has just been ravaged by bird flu, which led to the culling of millions of ducks, and last month, Russia reported the first case of a bird flu strain – H5N8 – being passed from poultry to humans. That’s hardly surprising when you know that animal-exploiting industries pack sick, stressed, and injured animals together, making it very easy for infectious diseases to spread through the exchange of urine, excrement, pus, and blood. Animals with infections, sores, and festering, open wounds are a common sight on foie gras farms.

According to the US Centers for Disease Control and Prevention, approximately 75 per cent of recently emerged infectious diseases affecting humans originated in other animals. Amidst the continuing global COVID-19 pandemic, it’s time we all made the connection between the suffering we inflict on animals and major disease outbreaks around the world.

So far, despite the prohibitions in Council Directive 98/58/EC against providing farm animals with food in a manner that causes “unnecessary suffering”, there is a plethora of scientific evidence, supplied to the Directorate-General for Health and Consumer Protection by animal welfare organisations, of ways in which foie gras production breaches European laws. There are many examples of the devastating consequences of humans’ commodification of animals, but the EU has failed to take any meaningful action, causing millions of birds to continue to suffer every year.

That’s not good enough. People must demand that the European Commission heed the warning of the EU Scientific Committee on Animal Health and Welfare that “force-feeding of ducks and geese should stop and this could be best achieved by the prohibition of the production, importation, distribution and sale of foie gras.”

Until the day comes when it’s impossible to obtain foie gras anywhere in Europe, the UK – the first country in the world to have introduced animal welfare legislation – has the opportunity to become the first country in the world to address the foie gras hypocrisy by saying “Non” to foie gras at the border. If James Bond and General Orlov can join forces to fight foie gras, surely we can manage it?