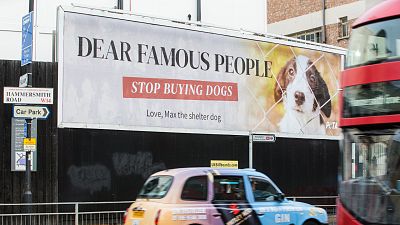 Statistics show animal homelessness has worsened throughout the pandemic. But lockdowns have led to numerous celebrities normalising the purchasing of “pedigree” and “designer” dogs from breeders, says PETA.

The heart-wrenching billboard aims to call out celebrities like Katie Price, Channing Tatum and Love Island’s Molly-Mae Hague for what the animal rights' group calls “irresponsible purchases”. It says that these purchases only fuel the breeding of puppies, while thousands of dogs are waiting in shelters with nowhere to call home.

Thousands of dogs are waiting in shelters with nowhere to call home.

Puppy Max is also making his own poignant appeal, to remind anyone considering bringing an animal into their home to adopt from their local shelter or rescue instead.

"I'm trying to keep my spirits up, but to be honest, it's getting harder and harder to keep my tail wagging," says Max. "I guess I just want to know what's wrong with me. Sure, I may not be a puppy – but I still have years of life ahead of me and so much love to give."

At the start of the pandemic, Google searches for ‘buy a puppy’ increased by 166 per cent, as many sought some canine comfort while stuck inside. Sadly, animal shelters around the UK also reported a rise in the number of ‘lockdown puppies’, dogs acquired during the first lockdown and abandoned once the novelty wore off.

Every time someone buys a kitten or a puppy from a breeder, a dog or a cat in a shelter loses his or her chance at finding a home, states the animal rights group.

We spoke to PETA director Elisa Allen about the rising popularity of purchasing dogs.

"When celebrities purchase dogs from breeders, they drive up the demand to bring more puppies into a world that's already overflowing with homeless animals," she explains.

"PETA is asking celebrities and social media influencers to inform themselves about the homeless-animal crisis and stop contributing to it, to recognise that their choices have an impact that reaches far beyond Instagram, and to show compassion for the tens of thousands of homeless animals in the UK and elsewhere."

The celebrities targeted by the campaign have been contacted by Euronews Living for comment, but have yet to respond.

As lockdown bites, Germans hope dogs can help them through ruff times