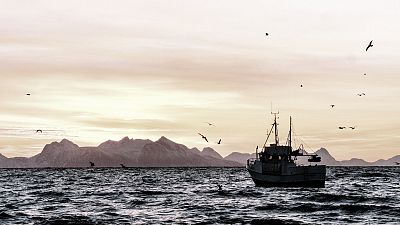 Satellite technology is being used to track ships fishing illegally off coastal and island nations.   -   Copyright  Getty via Canva
By Rosie Frost  •  Updated: 01/03/2021

An international programme to track illegal fishing from space has been launched by the Canadian Government.

The €4.6 million programme will use satellites to help authorities locate ships, known as ‘dark vessels’, which switch off their location-transmitting devices to avoid being detected.

“Illegal fishing threatens the health of our fish stocks and takes resources away from hard-working, law-abiding fishers,” says Bernadette Jordan, Minister of Fisheries, Oceans and the Canadian Coast Guard.

The system uses a number of methods to find vessels with their tracking devices turned off. Light and radar emissions are just two of a wide variety of detection methods that can be used to identify ships that may be fishing illegally.

It can also use environmental conditions including the temperature of the water and chlorophyll levels to work out where the fish will be. With the fish come the fisherman so narrowing down the areas that authorities have to search will help them to locate illegal operations.

“Through the Dark Vessel Detection programme, we're partnering with other ocean nations to better detect and prevent illegal fishing around the world,” Jordan adds.

A similar pilot programme was launched earlier this year to track dark vessels in Costa Rica and the Bahamas. So far the Canadian Government says it has resulted in big fines for five ships found to be operating outside of the law.

The team hopes to expand the partnership to include other coastal and island nations around the world impacted by the unregulated practice.

Why is illegal fishing a problem?

Illegal, unreported and unregulated fishing accounts for almost a third of fishing worldwide, according to the Canadian Department of Fisheries and Oceans. Up to 26 million tonnes of fish are caught illegally around the world every year at a cost of around €15 million to the global economy.

Illegal, unreported and unregulated fishing accounts for almost a third of fishing worldwide.

It is a leading cause of overfishing and, because of its clandestine nature, isn’t accounted for when governments assess the impact of the industry on our oceans.

As well as affecting marine biodiversity and ecosystems, overfishing also has a disproportionate impact on coastal and island nations. Many of these vulnerable communities rely on the ocean for their livelihoods.

The new space programme hopes to help these communities to protect the health of their oceans and ensure food security in the future.

“This state-of-the-art system will help Ecuador and small island nations in the Pacific region respond to illegal fishing impacting the Galapagos Islands and the food and economic security of its people,” says Marc Garneau, the Canadian Minister of Foreign Affairs.