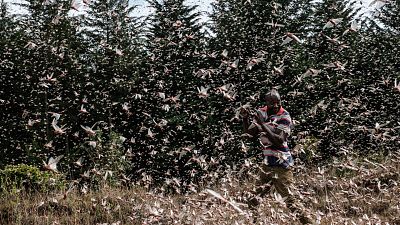 With Kenya undergoing its worst locust plague in 70 years, one company is empowering local communities to come up with sustainable solutions.

Swarms of locusts flocked to Kenya in late 2019, after a bout of unusual weather patterns was exacerbated by climate change. The infestation soon spread eastwards, affecting Yemen, Somalia and Ethiopia too.

Locusts threaten the food security of millions of people, as they devour crops and leave serious agricultural damage in their wake.

African regenerative agriculture company The Bug Picture is helping communities in Kenya turn the problem on its head. Specialising in insect-based protein that is environmentally sustainable to farm, it has come up with a way of turning desert locusts into animal feed and fertiliser.

It has come up with a way of turning desert locusts into animal feed and fertiliser.

Affected communities are encouraged to harvest live locusts and receive immediate payment through a mobile platform.

“We are empowering the individual to contribute to a solution which we think is very powerful,” founder Laura Stanford tells Euronews Living.

“We see this as a complementary approach to fill the gaps where FAO [the UN’s Food and Agriculture Organization] is unable to spray due to small swarm size, settlement areas and areas of intensive crop farming.”

Financed by the Danida Emergency Fund, the company hopes that this alternative response will prevent future plagues from ravaging Kenya.

How are locusts and climate change related?

Locusts are invertebrate insects around the size of a paperclip.

Plagues of the invertebrates have devastated societies since the Pharaohs led ancient Egypt, and they still wreak havoc today. But desert locusts are particularly threatening and affect the economic livelihood of a tenth of the planet’s population.

They are described as gregarious and are known to rapidly reproduce. What’s more, they can cover vast distances - some species may travel 130 kilometres or more a day, according to National Geographic.

A swarm the size of Paris can eat the same amount of food in one day as half the population of France.

Locust plagues and climate change are intrinsically linked because of the conditions they thrive in.

During dry spells, the animals are forced together in patchy areas of land where the remaining vegetation lies. This means they become more sociable and reproduce quicker.

Some experts worry that these plagues will worsen still in a warming world. It is estimated that the onset of locusts has been caused by rising sea temperatures and recent heavy rains and unusual storm activity in the East African region.

These impacts are linked to the ‘Indian Ocean Dipole’, a climate system in the Indian Ocean that affects weather from East Africa to Western Australia.

Preventing plagues in African countries particularly is difficult, due to the remoteness of the landscape. But scientists are looking at past weather patterns and historical records to identify areas where swarms might occur, and then spraying those areas with chemicals.