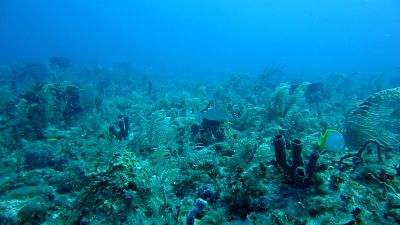 Marine scientists say the ocean could potentially hold the cure to a range of diseases, if more research was done.

Around 80 per cent of the ocean remains unmapped, meaning the full potential of the sea as a resource for medicine, among other things, is still largely unknown.

The ocean has been looked to as a source of medicine for centuries, but now, scientists say more resources are needed to harness the power of marine life.

Last week, the ‘Decade of Ocean Science for Sustainable Development’ (DOSSDUN), a major new initiative to address this need for more marine research, was launched.

According to Dr Vladimir Ryabin, the lead of the initiative, the ocean could help us find a cure for a range of diseases - including those caused by COVID-19.

“The ocean can help us to generate some compounds that are able to destroy the resistance of bacteria to antibiotics,” he says.

“Many people in hospitals now die, not because of Coronavirus but because of secondary infection. So there are some antiviral properties [and] immune-stimulating properties. This science is urgently needed."

In order to properly investigate the ocean’s potential, however, more time is undoubtedly needed.

One of the biggest factors slowing down further marine research is our lack of understanding of what exists in the water.

“We know so little that we don’t even know what could be there to be discovered,” Dr Ryabinin tells Euronews Living. “Think about the simple but shocking number that over 1 million species could yet be awaiting to be discovered by science - let alone medical properties.”

While he is sceptical as to whether the ocean could provide an actual cure for COVID-19, he does believe it could “provide significant and multi-faceted help” in combating the virus.

“For this we need to give ocean medical research the scale it deserves. But it will take time, which we may not have.”

This same view is echoed by Professor Alan Deidun, from the University of Malta and current Ocean Ambassador for Malta.

When asked if he believes a cure for viruses like COVID-19 may lie at the bottom of the ocean, he says, “potentially, yes, but the process is a lengthy one and hence, if we do start now, we might find the cure for a future pandemic which will emerge in the years to come.”

Professor Deidun highlights the need for greater investment into marine research, if we are to truly harness the ocean’s potential.

Extensive research has already been carried out for the potential to develop anti-cancer drugs. And now, scientists are exploring the possibility of using compounds found in microalgae to treat COVID-19.

According to one study, microalgae are rich in a type of protein which has been used in other antiviral drugs.

A type of protein called mannose-binding lectins (MBL) works to disrupt the self-assembly of a virus during replication. MBLs could even hold the key to treating Ebola, a deadly disease which has recently spread across parts of West Africa.

Griffithsin, which is a type of MBL found in red algae has previously shown effectiveness on other forms of the SARS virus, such as SARS-CoV and MERS-CoV.

In one experiment, mice infected with SARS-CoV had a 100 per cent survival rate when given regular doses of griffithsin. This has shown promising potential for the treatment of COVID-19 with algae-derived compounds.

“To restore the marine environment we need knowledge, an ocean science revolution," says Dr Antionio Guterras, Secretary-General of the UN. The next decade could be critical for the ocean, which we rely upon for more than 50 percent of the earth’s oxygen.