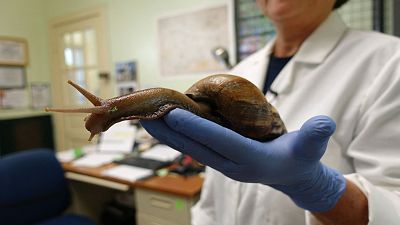 Not only do the animals threaten to destroy a vast array of plants and trees, they pose the risk of transmitting a rare type of meningitis to humans.

The snail, native to East Africa, is one of the most damaging in the world, eating at least 500 different types of plants, tree bark, and even paint and stucco on houses, according to the US Department of Agriculture.

The invasion could be devastating to Florida’s agriculture and natural areas as the snails cause extensive damage to tropical and subtropical environments.

It is listed as one of the top 100 invasive species in the world.

The gastropod, whose shell can grow to the size of a human fist, also often carries a parasite known as ‘rat lungworm’ that can transmit a type of meningitis. Symptoms of the disease include muscle aches, headache, stiff neck, fever and vomiting.

‘Do not eat them,’ warn officials

More than 1,000 of the creatures have been collected in the Tampa suburb of New Port Richey in Pasco County. All of those tested as of Thursday were not carrying the rat lungworm parasite, Greg Hodges, assistant director of the state's Division of Plant Industry, said at a briefing.

They stress the importance of not touching nor ingesting the snail to prevent infections.

Most importantly, do not eat them. This is not a snail to be put on butter and oil and garlic.

To eradicate the snails, the state has placed an area of the county around New Port Richey under watch and will treat all properties within the zone until the snails are eliminated, the department's website said.

The treatment with metaldehyde, a pesticide used to control snails and slugs, will take 18 months, and the area will be monitored for two years after the last snail find.

How did the snails get to Florida?

It is unclear how the snail made its way to Florida, but the US Department of Agriculture's website says it is a common hitchhiker on cargos. It can also be illegally imported by people for the purpose of food or as pets.

This is the third time that the giant African land snail has been found in Florida.

If the snail populations grow beyond a core concentration in the New Port Richey area, it may take longer than expected to eradicate the pests.