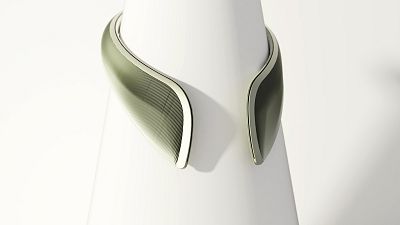 An innovative beauty concept that allows you to avoid toxic urban environments using your own personal bubble of air has been released by innovative design agency, Seymourpowell.

The Atmosphère Collar is a wearable device that is designed to provide environmental protection against poor air quality. It uses location data combined with your own personal information like skin type and movement and is designed to feel weightless with sensors that interpret the users needs changing the makeup of the vapour it emits to reflect this.

Around 17% of the urban population of Europe was exposed to levels of particulate matters above the daily recommended limit in 2019, according to the European Environment Agency. This is particularly worrying as researchers in Canada have recently discovered a link between very small particles of pollution produced by burning fuel and brain cancer.

Thick smog clouds and unsafe levels of air pollution are increasingly the subject of news from capitals across the planet. Air quality was so bad in New Delhi at the beginning of November that schools had to close in order to protect the health of students.

“When we project ahead, we can see that life in the urban environment is going to be incredibly tough;” says Mariel Brown, Director of Foresight at Seymourpowell, “poor air quality, restricted resources, soaring temperatures, long commuting times, loud and uncontrollable noise. This uncomfortable reality will take its toll on our mental health and sense of wellbeing.”

Read More | Would you feel differently about your clothes if they were alive?

Growing concerns about the potential harm caused by air pollution only contribute further to eco-anxiety and, according to Seymourpowell, are altering people’s beauty rituals. The company has identified a new urgency for people to detoxify their body, mind and soul and have created the device to deliver reassurance alongside efficacy.

Both the collar and the accompanying chaise longue encapsulate the user within a bubble of air that provides the optimal conditions for their own body. With an app, users would be able to see that Atmosphère is working so as to reassure them that they are not coming in contact with unwanted pollutants.

Jonny Culkin, a designer at the agency, added thanks to the ever-shifting state of the urban environment it was important for companies to consider how pollution can impact physiological and psychological health. “For beauty brands to successfully meet the demands of future consumers, they will need to stretch their thinking far beyond a formula in a pack,” Culkin explains.

Although this is just a concept, research with global early adopters suggested an urgent desire for more extreme cleansing rituals. The design agency sees a future in which people may no longer need to apply beauty products but instead use devices like Atmosphère to provide optimal conditions for both their skin and their general wellbeing.