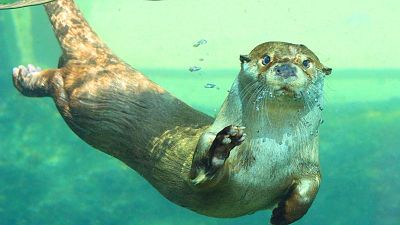 Otters are having a racy impact on the sex lives of seagrass, ecologists have found.

When the playful animals dig for clams in the meadows they leave a pockmarked “moonscape” behind them. These have lots of craters and pits and spur seagrass on to have more sex.

By disturbing the seagrass roots, otters encourage the plants to flower at a higher rate, a new study in Science journal shows.

Surprisingly, sea otters influence seagrass even more than the conditions or size of a seagrass meadow.

What’s turning the seagrass on?

Seagrasses, so-named for their long, ribbon-like fronds, are the only flowering plants able to pollinate under seawater.

This isn’t the only way it reproduces: the plant can also clone itself asexually, by sending out underground roots that produce genetically identical shoots. An entire meadow could flourish in this way, but the sameness of its DNA leaves the seagrass exposed to environmental changes - like warming waters.

When sea otters are around however, the carnivores dig up around 5 per cent of the meadows where they live. This puts eelgrass under ‘stress’, causing it to flower more, while also clearing spots on the seafloor for seedlings to take root.

The intimate relationship between plant and animal has been revealed by ecologist Erin Foster and biologist Jane Watson in Canada, co-authors of the new study supported by the Hakai Institute.

Diving into the coastal waters of British Columbia, Foster and Watson’s team gathered 462 shoots of eelgrass - a type of seagrass found in the cool waters of the North Pacific Ocean.

They took cuttings from 15 different meadows: six where otters had been living for more than 30 years, three where they had returned in the past 10 years, and six where the animals had been wiped out by human hunters over 100 years ago.

The DNA sections showed that eelgrass in areas with long-established sea otter populations had 30 per cent higher genetic diversity.

The strong link between otters and seagrass - at opposite ends of the food chain - is not just a tantalising thread in the coastal ecosystem: it offers a key to restoring the plant that removes carbon 30 times faster than a rainforest.

Restoring seagrass meadows is a vital natural solution to tackling climate change, as they are a major carbon sink. In the UK, 92 per cent of the island’s seagrass has disappeared in the last century. Undisturbed, seagrass can remove carbon for thousands of years, burying it in its roots.

Commenting on the study, marine ecologist Boris Worm, described it as a “major advance”, showing that “large animals may help to actively maintain the quality and resilience of their habitat”, as reported in Science.

While the study gives credit to sea otters, Foster is quick to point out that her finding may be a “rediscovery”, noting in Science that the Indigenous Seri people in the Gulf of California have long harvested eelgrass and know to expect better harvests from more disturbed meadows.

Douglas McCauley, a professor of ocean science at the University of California, says that while the study is “novel and exciting”, it doesn’t mean that disturbing ecosystems will always lead to more genetic diversity. Heavy-handed human involvement could well swing the plants towards self-cloning.

As restoration projects pick up, the new study makes a stimulating case for putting otters in the picture too.