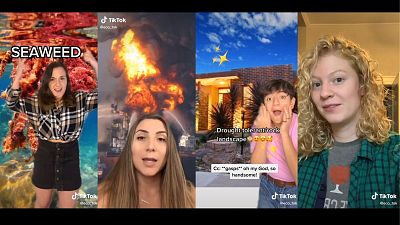 The growing influence of TikTok is undeniable, especially for those aged 13 to 25. It isn’t surprising, then, that potentially the most pressing issue of this generation has a voice on the platform: the climate crisis.

For the uninitiated, TikTok is an app where users create clips anywhere from just a few seconds to one minute in length. Launched in 2016, it started as a place for teens to share lip syncing and dance trends but what is being shared has changed dramatically over the last year or so.

Now users creating educational content can attract just as much attention as comedy, fashion or music. As TikTok creator and BBC journalist, Sophia Smith Galer put it, “its success is a refreshing revolution for meritocratic self-expression”.

Despite being shorter than on other platforms, these videos have become a powerful tool for its young users to highlight some of the most pressing issues of their generation. With 61 per cent of Gen Z in the US using social media as their daily news source, TikTok has rapidly developed into a place for political protest and debate.

Last year a group of users even banded together to disrupt US politics. They reserved tickets to a Trump rally in Tulsa, Oklahoma, taking credit for the lower than expected attendance at the event as a protest against then-President Trump’s choice of date and location.

TikTok was the most downloaded app of 2020. With more than 1 billion monthly active users, the social media platform has evolved into something far more than just a viral video factory.

The idea for EcoTok emerged in July last year. Created by US high school student, Alex Silva, science communicator Abbie Richards (who first went viral after calling for golf to be banned) was soon on board. Since then it has expanded into a content creation ‘hype house’ with an ever evolving roster of around 20 different diverse contributors.

“I think that's what makes our collective so special,” says Alaina Wood, a member of the group’s executive board. It is made up of Richards, Silva and Wood with Sabrina Wisbiski, a zero waste advocate, as the fourth.

“I know that there are other groups that are just activists, or just scientists or just youth, you know, or maybe people later in their career. I think that's what makes our message so unique is we get every perspective possible,” Wood adds.

With more than 80 thousand followers and 1.2 million likes on the platform, EcoTok’s contributors have included the likes of marine biologist Carissa Cabrera, environmental justice advocate Isaias Hernandez and SciAll founder Mile Gil. They say that among their ranks you’ll find everything from scientists to students to activists and civil servants.

If you are tempted to think it is just teens creating ‘silly’ videos, think again. The executive board themselves have some impressive credentials. Wood works in waste and water management with a degree in geography and sustainability science. Richards has a degree in environmental science and is currently studying for a MSc in climate at Wageningen University in the Netherlands.

They might not be exactly what we expect from science communication but the group says this is a good thing. It encourages their young audience to see themselves represented in climate science in a way they can’t anywhere else.

“You don't necessarily get to see younger people or people who don't work in a lab,” Wood explains. “I know when I was younger, I thought that in order to do science, you had to wear a lab coat all the time.”

“I think when it comes to any issue, and especially with environmentalism, you're going to be more receptive to certain voices that resonate with you,” adds Richards.

“It allows us to diversify and allows us to expand our voices and reach more people. It's absolutely our strong suit.”

So how does a platform ostensibly famous for its videos of dancing teens and absurdist humour serve as a place for environmental education?

“I mean, good content is good content,” says Richards. “If you give a very dry video, it might not do that well, but if you can create a good meme or a really interesting and compelling video, then, like anything else, it just allows you to reach more people.

Their ability to engage their followers on serious environmental and social issues has led to a partnership with TED Countdown and more recently a content series for the UN Environment Programme.

But, Richards warns, the platform’s ability to promote this kind of information sharing also opens the door to more misinformation. Creators pushing questionable tree planting initiatives and conspiracy theories can theoretically get the same amount of attention as an expert. It has been an ongoing problem for all social media platforms of late, a topic that Richards herself has become an expert on.

“A lot of people don't know the difference between what is authentic and what is either unproductive or a full-blown scam. And we were working on teaching people,” she says.

“TikTok is definitely a place to get the conversation started. But it's not enough to, like fully grasp on, you know, every single idea that's given to people,” says Silva.

Lately, the group has been putting a lot of emphasis on citing scientific sources, providing resources and teaching people about media literacy. They have been building a community that thrives on asking more of its creators.

But there's one aspect in particular, the group says, which is making the platform a unique place for tackling the misinformation: duets.

This feature allows users to build on another person’s video by recording your own alongside it as it plays. It was what birthed the recent viral sea shanty phenomenon, as different users added their voices to the track, building a chorus of singers.

“I think those clickbaity videos are getting more called out by people who are actually experts in the field. I see that all the time and I think it's kind of a good thing that they're getting called out,” Wisbiski says.

“People have duetted videos and been angry at me for the things I've said, I think we've all experienced that,” adds Wood, “but it also can open up an avenue for constructive criticism and constructive thinking.”

She says it is good to have people question your content, to build a community that wants to know more than the viewpoint being presented, “as long as they're open to accepting the information presented.”

“Being able to send people either to other creators or to other resources, or be like, Hey, here's a really neat article you can read if you want to learn more,” Richards adds.

“It is great just for science communications in general.”

A balance of system change and personal

One of the successes of EcoTok has been tapping into people’s desire to see the climate crisis addressed on multiple levels. Their contributors connect with issues that range from litter picking initiatives to environmental racism. It's a mashup of personal lifestyle choices and wider more systematic calls for change. Wisbiski says it helps to play to everyone’s comfort level.

“Not everyone is going to get on the phone and call representatives or they are, like, children you know? But they will pick up trash.”

Silva believes that having productive actions that their followers can take also helps to soften the weight of anxiety some feel about the future of the planet. Doing something, he says, can alleviate that sense of hopelessness.

“I definitely feel like young people are always wanting to do something. I get questions all the time like, what can I do? How can we stop this or this?”

“And I also advocate for corporate change but there are also times where they're like: ‘okay, I really want to do something like what can I do?’ And, yeah, a mix is really good for that.”

Following trends in songs, dances or hashtags, creating lighter content alongside serious educational content; it gets their videos in front of an ever increasing number of people. TikTok’s powerful algorithm means that the more environmental content you like or watch, the more it serves you on your ‘For You’ page.

It all helps to do what EcoTok set out to do in the first place, to bring as many people as possible into the conversation about climate change.

'I'm not a cat': US lawyer accidently turns on feline Zoom filter