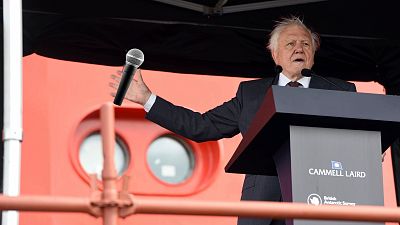 Young climate activists around the world have launched a campaign to encourage Sir David Attenborough to use his Instagram account for continued environmental education.

After just six weeks of activity, Attenborough’s profile on the platform has become a legacy account and will no longer be posting. Campaigners have therefore launched a movement, urging him to use his sizeable audience to promote the voices and work of activists around the world - especially in the Global South.

The 94-year-old documentarian broke social media history in September when his Instagram account reached one million followers in just under five hours. But after amassing an audience of 6.1 million and 45 million video plays, the producers who run the account - Jonnie Hughes and Colin Butfield of Silverback Films - announced that they wouldn’t be putting up any more posts on the page.

The 27 posts on Sir David Attenborough’s Instagram account were used to promote his most recent documentary, A Life on Our Planet. The film was a noted departure from Attenborough’s previous softness on climate issues, instead delivering a powerful message about the damage humans have done to our planet, along with a manifesto for launching change. Though not without criticism, the piece was well-received by viewers and activists alike.

Rather than losing the momentum built by both the documentary and the record-breaking Instagram account, young activists want Attenborough’s page to be used to continue educating people on climate issues. A campaign called #PassTheMic has been launched, encouraging Attenborough and his producers to amplify voices on the frontlines of climate change, helping to support and recognise their vital work.

What do activists want to use his account for?

Changemakers from a range of organisations, including Greta Thunberg’s Fridays For Future, are behind the #PassTheMic campaign. They want to ensure Attenborough’s account remains active, promoting the voices from MAPA (Most Affected People and Areas) and of BIPOC (Black and Indigenous People of Colour) to his sizeable audience.

“For so many indigenous people and people of colour, social media is an outlet to share their stories, raise awareness about threats and connect with so many others who share the same messages of hope and change,” explains climate justice activist Tori Tsui. “With 6 million engaged followers at your fingertips, it only makes sense to keep the momentum going.”

This is a sentiment which has previously been echoed by Attenborough himself. He said in a conversation with Sir Michael Palin, “we are all in [the climate crisis] together, and we have to cooperate. Cooperation sometimes means giving up things, as well as gaining things.”

It’s been suggested that the veteran broadcaster’s profile becomes a revolving line-up of different activists, each taking over the page for a set period to raise awareness around a project, location or cause.

The campaigners feel that by passing the mic to frontline communities, it not only gives agency to those most affected but also means that coverage reflects their experiences more honestly.

“When you hear the Philippines, maybe you'll think of the disastrous typhoon Goni – the strongest on the planet this year,” says Filipino climate activist Mitzi Jonelle Tan.

“You'll read about the hundreds of thousands affected, but you won't see who we are or hear our experiences, or see how ferociously we've been fighting back.

“Having the chance to be heard and listened to by 6 million people is an opportunity that a lot of us in the most affected areas will never have. It is an opportunity for people to see that we are not voiceless; we are not just sad stories or a statistic you see on your screen; we are climate activists and we have our own story to share.

An open letter to Attenborough and his producers has been written, with nearly 300 signatures from activists and environmentalists around the world.