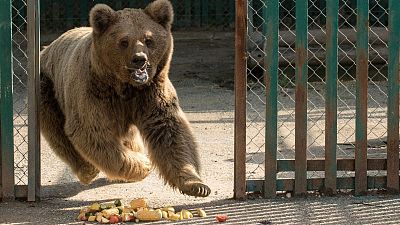 With the last two animals leaving Islamabad's infamous Marghazar Zoo for good, it has now closed down.

The female and the male Himalayan bears, named Suzie and Bubloo, were transported safely to Jordan by plane. This was after reports of neglect and mistreatment.

But the trip was not without complications after the Pakistani authorities "cancelled the export permit" at the last minute, Dr Amir Khalil, a veterinarian at Four Paws International, told Euronews Green.

Eventually, the paperwork needed to allow Suzie and Bubloo to travel into the country was completed, "though the bears have nothing to declare," Khalil added laughing.

After some time spent in quarantine, the bears have settled into their new 5,000-square-metre home at the Al Ma'wa for Nature and Wildlife. The nature reserve is run by the Princess Alia Foundation and Four Paws International.

A recent update Four Paws stated that "the bears are calmer, Suzie is still a bit shy and prefers to sleep more," on the other hand, "Bubloo was very curious in his new home." Both bears are receiving top-class medical care on behalf of the Leibnitz Institute for Zoo and Wildlife Research.

Four Paws International has been in charge of relocating around 30 animals from the zoo including, deer, wolves and monkeys. This comes after the Supreme Court of Pakistan ordered that the zoo shut its doors after multiple allegations of maltreatment.

The decision was a result of more than five years of campaigning. Conservationists, Pakistani citizens and American singer Cher have been working on having the world's loneliest elephant released from the zoo. After 35 years, Kaavan was successfully rescued a few weeks before the bears.

The Islamabad Zoo was established in 1978 as a home for indigenous species found in the region. However, with little legislation to safeguard animal welfare, zoos across Pakistan are notorious for their poor conditions. Authorities now plan to build a $7.5 million (€6.3 million) wildlife conservation centre to replace the zoo in Islamabad.

Click on the video above to learn more about the rescue of Suzie and Bubloo.