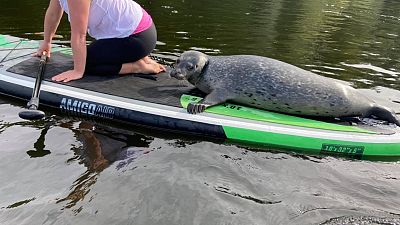 This little guy joined in with a class of beginner paddleboarders on a river in Lincolnshire.   -   Copyright  Yellowbelly SUP School
By Marthe de Ferrer  •  Updated: 05/07/2021

Paddleboarders in Lincolnshire, UK had a special guest in their lesson as a seal decided to hitch a lift down the river.

A group of beginners were out with Yellowbelly SUP School's Phil May, when the animal popped up and surprised the paddlers.

Phil says there have been rumours of a seal living in the River Witham for months, but despite spending a great deal of time on the water, it's not something he's ever personally witnessed.

"There have been rumours of the seal being there before," explains Phil, "I was speaking to a gentleman on the riverbank today, and apparently there used to be three seals that pulled themselves out on by a sailing club and used to sun themselves on the grass.

"So it's not a new thing, but it is the first time I've ever seen it and I've been paddling that stretch of water for a long time."

As they were inspecting the happy creature, Phil spotted that he was tagged. It turns out the seal - who is called Dandy Dinmont - was released nearby in 2017 by the British wildlife charity RSPCA, along with five others.

"I asked the person who did the tracking if there was any concern about him being in freshwater, and he said, 'Nope, that's absolutely fine. They can deal with the freshwater no problem,'" says Phil.

"They said he might go back out when he gets a chance and go back to the salt. But the river is full of fish at the minute so there's no reason for them to really want to go out there. It's probably easier hunting in a river than it is out at sea!"

A chance to experience nature

For now, though, it seems Dandy is pretty happy entertaining paddleboarders and becoming a viral internet sensation!

Phil is also delighted with the popularity of his video and hopes it shows how incredible the sport can be for interacting with nature - though he doesn't guarantee that Dandy will make an appearance again.

"I think if anybody's going to come down and join us, then brilliant! But do it safely, do it with respect," he adds, "and just enjoy nature as a whole, not just waiting for the seal."