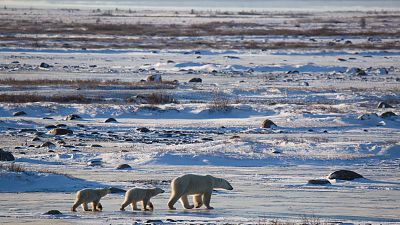 A 'Beardar' is helping to spot polar bears in Churchill, Canada before they come into conflict with people.   -   Copyright  Katharina M Miller/ Polar Bears International
By Rosie Frost  •  Updated: 05/12/2020

While they wait for sea ice to refreeze, hundreds of polar bears roam the shores of Hudson Bay, Canada. These furry white animals are spending ever-increasing amounts of time on land as climate change pushes the date on which the ice forms further and further back.

The Hudson Bay bears are some of the most southerly members of this species on the planet. BJ Kirschhoffer of Polar Bears International tells me they act as a sort of “canary in a coal mine” for the rest of the bear population.

“They've spent an average of about 30 days longer on land over the last 40 years. So about a month less access to sea ice because there just isn't any ice,” he explains. The longer they spend on land, the more likely they are to have a confrontation with humans. Confrontations that can easily end in tragedy for either people or the rapidly diminishing bear population.

“You know, we really have to get our act together as a human race to combat global climate change to get this under control,” BJ says, “in the meantime, though, we also have to protect these populations of polar bears.”

Artificial intelligence, or AI, might not initially spring to mind when searching for solutions to help humans to coexist with their polar neighbours. The cutting-edge tech, however, is helping conservationists like BJ in some of the world’s most remote locations to do their work more efficiently and effectively.

To prevent the deaths of both human and caniform inhabitants, researchers in Churchill have been testing out a radar detecting system or “Beardar”. Originally designed for military use, the radar can spot the bears when they approach communities or camps - especially at night or during snowstorms when they are rarely visible to the human eye.

Right now we're programming the artificial intelligence portion of it to help us understand what is a polar bear. There's a lot of things that move in the Arctic on the landscape.

But the challenge for the community’s scientists is whether they can accurately train the system to trigger only for the animals they are concerned about and not the copious number of relatively harmless caribou that wander past. That is where Artificial Intelligence comes in.

“Right now we're programming the artificial intelligence portion of it to help us understand what is a polar bear. There's a lot of things that move in the Arctic on the landscape,” BJ explains.

AI systems require huge amounts of data to train them. These data sets are fed into a computer programme so that it can learn to recognise patterns and generate predictions. You want these computer systems to ‘think’ as much like a human as possible just much faster.

So far the “Beardar” has recognised polar bears 150 times since July. The more diverse animals it successfully recognises, the better it gets. BJ says they are only just getting to grips with what could be possible if the AI can learn to correctly identify the animals.

In the future, it could provide an early warning system that would help bears and people to live together while we attempt to fix our warming world.

“Is it a blinking light somewhere? Is it text messaging? Is it an audible siren in the community? Is it you know, a stoplight or something like that?” BJ says.

He doesn’t know what it will look like yet, but he believes that being able to correctly identify animals using radar offers a reprieve for Churchill’s bears. And some exciting possibilities for surveying the region's biodiversity in the future too.

The algorithm that can see animals invisible to the human eye

Gabon, Central Africa is home to an incredible wealth of biodiversity. Gorillas, chimpanzees, pangolins and 80 per cent of the world’s remaining forest elephant population are among the animals that inhabit this tropical ecosystem.

Throughout its 13 national parks, camera traps help park rangers with conservation work. These projects are an essential fight against time, in a country that loses 150 elephants every month.

None of the artificial intelligence developments already available had proved suitable for the park rangers. Those that needed top of the range phones, computers and fast internet access were impossible to use. in remote locations.

To solve the problem, an initiative using AI for good helped to develop an app that could sort through millions of images in a matter of months rather than years. It isn’t the first system of this kind, but machine learning experts at Appsilon and the University of Stirling are some of the first to take into account that biologists on the ground frequently have limited resources.

“Developing this image classification algorithm was an inspirational experience,” says Appsilon CEO, Filip Stachura. “It forced us to think out of the box to fully appreciate the complex reality of the conservation efforts in Gabon and the challenges in applying technological solutions.”

The result of their work is an easy-to-install AI app trained using millions of images that could run on your laptop at home without internet access. It classifies up to 3,000 images an hour and is correct 96 per cent of the time. It is so effective it can even recognise animals in photos where they are basically invisible to the human eye.

The tool is already proving valuable to park rangers deep in the tropical forests of Gabon helping them to identify mandrills and elephants by as little as a tusk or tail.

By identifying signs of disease in images, the app has successfully been used to help prevent the spread of a bacterial condition called Yaws which attacks the skin, bone and cartilage of humans and great apes.

An obligation to build things that can be used by others

Best of all, the Mbaza AI app is open source, that means scientists and programmers around the world can improve the code that makes it work. Other conservation organisations can also use its specially designed algorithms to help preserve biodiversity in other parts of the world.

Making software like this open-source is a massive part of the software engineering culture. Many believe it is their obligation to build things that can be used by others to work together to further technological advancements. Even computing giant Google’s Wildlife Insights platform which also uses AI to analyse camera trap photos is available for anyone to use.

It has helped other machine learning experts to utilize Google’s expertise and make it work in specific conservation situations like those for the park rangers in Gabon. Appsilon’s Stachura believes there is a certain satisfaction in knowing what you do is important and has an impact on the world.

“With our particular set of skills and expertise in data science, machine learning and AI solutions, we wanted to join the fight for better tomorrow and use technology for good,” he explains.