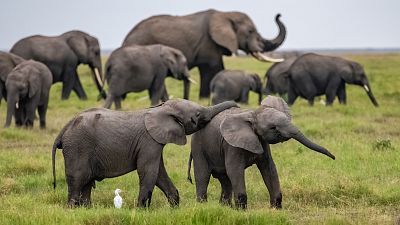 One National Park in Kenya is celebrating a recent elephant 'baby boom'.

Nestled in the shadow of Mount Kilimanjaro, Amboseli National Park has seen an unusually high number of elephant calve births in the last few months.

Roughly 1,500 elephants live in the 392-square-kilometre reservation, located along the border of Kenya and Tanzania. The National Park has seen a record number of more than 200 elephant calves born so far this year - and they're still hoping for more.

So what's changed? In short, it's the weather. There have been more severe drought cycles, which are followed by intense rainy seasons. Elephant fertility increases after heavy rains.

And that's not the only good news for elephants. The whole population has doubled over the last 30 years across Kenya, thanks to conservation efforts.

Although the pandemic has brought new dangers for these creatures. While ivory trading appears to have halted temporarily, there are still concerns over illegal poaching for food.

Back in Amboseli, Moss says one of the biggest threats to the calves now is another drought. "If say the rains fail right now, a lot of these calves will die. I do not know how many, but possibly half could die," she says.

The rainy season is due to begin in March and it's still uncertain what the forecast will be for 2021.