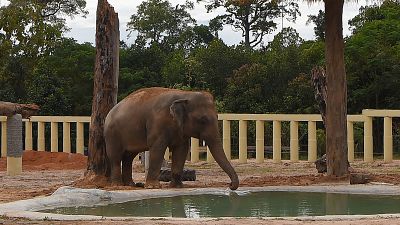 Kaavan, 'the world's loneliest elephant', has been making some much-needed friends on his first day in a sanctuary in Cambodia. He arrived there on Monday with celebrity friend, Cher.

The Asian elephant has spent his days at a dilapidated zoo in Islamabad, Pakistan, ever since 1985. He was originally a gift from Sri Lanka. But the 36-year-old creature has endured a lonely life, especially after his only companion died in 2012.

When Kaavan's story got out, it sparked global uproar from animal rights groups and celebrities like Cher who launched a campaign to save him. A Pakistani court finally approved the elephant's relocation in May.

So how did he get to Cambodia? Transporting an adult elephant by plane is no small task, and has only been undertaken a handful of times.

"Kaavan was eating, was not stressed - he was even a little bit sleeping, standing, leaning at the crate wall," he said.

After the elephant's plane landed, Buddhists blessed the crate. Kaavan was then loaded into a truck for the three-hour journey to his new home.

Hopefully Kaavan will not be lonely anymore. "We expect to breed Kaavan with local elephants - this is an effort to conserve the genetic fold," said deputy environment minister Neth Pheaktra.