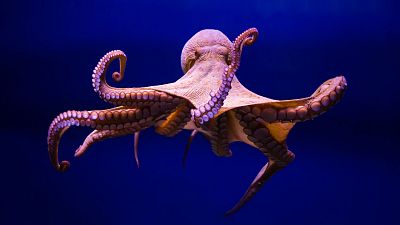 New research has revealed that octopuses often throw punches when they’re hunting alongside other fish.

The eight-legged cephalopods are known to hunt collaboratively with groupers (large-mouthed, heavy-bodied fish) and coral reef species as a tactical move which proves mutually beneficial.

According to the study published on Ecology, these collaborative hunts can take more than an hour to complete. Octopuses will sweep the rocks and coral crevices, while the bottom-feeding species scour the seafloor and other fish stand guard.

Sometimes these intelligent sea creatures will lash out over prey, but other times it’s out of pure spite.

“The octopus performs a swift, explosive motion with one arm directed at a specific fish partner, which we refer to as punching“ according to the. You’d think something which has nine brains would have a more civilised way of settling disputes!

“Octopuses and fishes are known to hunt together, taking advantage of the other's morphology and hunting strategy,” says Eduado Sampaio, author of the study, in a tweet. “Since multiple partners join, this creates a complex network where investment and pay-off can be unbalanced, giving rise to partner control mechanisms.”

This means that the octopus sees itself as the boss in these hunting groups. It will knock a fish to the side for a variety of reasons - the most obvious being to push it out of the way of prey.

In other interactions recorded, octopuses would punch the fish to essentially put them in their place and promote “collaborative behaviour in the following interactions”. But sometimes, the study found it to be just “spiteful behaviour” when there wasn’t anything to be immediately gained from doing this.

What do octopuses eat?

Octopuses generally eat shrimp, crab and lobsters as well as fish. Larger Octopus varieties have even been known to take on small sharks. Well, now that we know they can handle themselves, that doesn’t surprise us.

It’s clear that throwing punches is an extra addition to the list of weird and wonderful facts about this blue-blooded, two-hearted sea creature.

Why 2020 was a promising year for wildlife around the globe

What polar bears and monkeys can teach us about social distancing