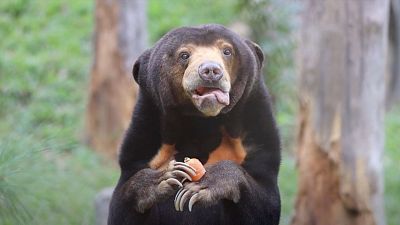 Conservation NGO Animals Asia made a wonderful Christmas gift to the 189 rescued bears living in its sanctuary in Tam Dao, Vietnam.

Life in the sanctuary couldn't be more different from what these animals used to have.

Many of them have been rescued from bear bile farms where they were tortured daily for traditional medicine purposes. Four others arrived from a circus this year where they had been taken to perform after being taken from their mother in the wild.

One of the latest arrivals is a small cub called Yên, meaning “peace” in Vietnamese. He was rescued in November during a wildlife trafficking operation where he was found being held in a birdcage.

"This year we have rescued 11 bears and ended bear bile farming in Lang Son province for good," says Senior Bear Team Manager Sarah Van Herpt about this year's achievements. One of the best news for the team is that six more bears are arriving on the week of Christmas.

Animals Asia's team has made all kinds of efforts to make Christmas festive for these bears. "We usually gather the team to make paper mache gifts and baubles for them, with lots of tasty treats inside, " says Van Herpt. "We often also dress up with Santa hats."

The paper mache gifts are stuck together with a bear safe glue of flour and water, or oats, and then painted with non-toxic paint.

The team has plenty of funny memories of the bears opening their Christmas gifts. "During the first Christmas at Animals Asia I got to see our silly young male moon bear Wilf stick his head right into a box and wear it as a hat for a bit, " recalls Van Herpt.

Check out the video to see these adorable bears opening their delicious gifts.

Meet the flying sea turtle who travelled 8,000 kilometres to Scotland