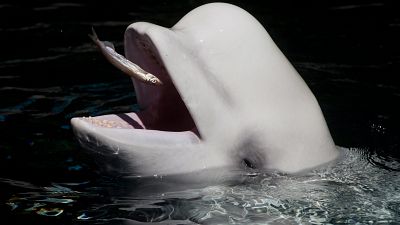 Two beluga whales are going through their final training before they are released into an open water sanctuary off Iceland's south coast. As Euronews Living previously reported, the two females, Little White and Little Grey, have spent more than 10 years in captivity after they were captured in Russian waters and sold to Changfeng Ocean World aquarium in Shanghai.

The mission to release them began when the marine park was acquired by British Merlin Entertainment, who teamed up with the wildlife fund Sea Life Trust to spearhead the effort.

"We hope to identify other beluga whales currently in aquariums who might be able to come and join Little White and Little Grey in the sanctuary," said Andy Bool, head of Sea Life Trust. "There are over 300 beluga whales in aquariums across the world at the moment. We hope that by showing that you can move them from an aquarium environment into a more natural space that we're providing a vision for a potentially different future for those animals," he added.

The transfer can be very dangerous for these animals and successfully preparing them for the conditions in their natural habitat is not an easy task. Little White and Little Grey have been building more blubber for the cooler sub-Arctic waters, as well as being introduced to the different flora and fauna they will meet in the bay.

They won't be withdrawing from the public eye, however. Their home will be a 32,000-square-metre bay pristine bay called Klettsvik, Iceland accessible by whale-watching boats. Klettsvik is the first project of this kind to open in the world, so if it is successful it could open up many new possibilities for rescued whales.