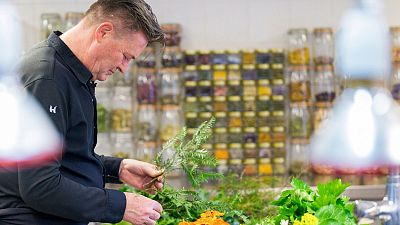 Michelin-starred chef, René Mathieu, is taking on global warming at his restaurant in Bourglinster, Luxembourg. He only cooks vegetarian meals and uses almost exclusively local produce to create his menus.

The restaurant, called La Distillerie, is located in the heart of Luxembourg's forest. It has attracted a lot of attention this year after the head chef's decision to entirely exclude animal products from the menu.

Instead, Mathieu starts his days among the trees surrounding the castle that houses the famous restaurant. He collects greenery, such as fir-tree and holly leaves, which he uses to make unique culinary concoctions.

His bold decisions have been rewarded by the We're Smart® Green Guide, a big name in the culinary world of fruit and vegetables. In September, the guide named La Distillerie as the 'best vegetable restaurant in the world' for 2020.

"René Mathieu is a pioneer in natural cuisine. He tastefully conjures up ingredients from the fields and forests around Château Bourglinster," writes the founder of We're Smart® Frank Fol on their website.

Despite having to close for two weeks due to the pandemic, Mathieu sees the current health crisis as an opportunity.

"It allows you to refocus on yourself, to be able to think, to think differently, to reinvent yourself," he says. "What is tomorrow's cuisine? What are we going to do to avoid this from happening again?" he adds hoping that it helps to change the way people perceive things.