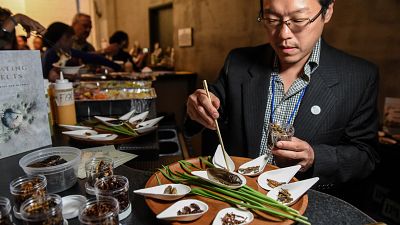 Having cricket tacos or fried Manchurian scorpions on the menu of your favourite organic and sustainable restaurant has a pretty good chance in the future. Edible insects are on the rise, they are becoming more and more popular for nutritional reasons and for environmental benefits.

According to a report of Global Market Insights, the global edible insects market size is expected to grow from over $55 million in 2017 to over $710 million by 2024.

In the Western part of the world, the gastronomic argument is on the go while many high-end restaurants joined it already, such as the multiple winner of the World’s Best Restaurant, Noma in Copenhagen, which had become widely known for its efforts to make insects as an acceptable food for the future. Another temple of high-end gastronomy, São Paulo’s D.O.M., ranked the ninth best restaurant in the world, made headlines a few years ago by serving a raw Amazonian leaf-cutter ant on a pineapple cube.

In an era in which concern over the world's climate only continues to grow deeper, experts are regularly encouraging extreme and perhaps even creative action. Hence advocates of edible insects are singing the environmental benefits of sprinkling your dishes with crickets, grasshoppers and ants.

Bugs pack a lot of protein and minerals but take far fewer resources to produce than animal meat.

Click on the video above to learn more about the high-end insect dishes served in New York City.

Stuck for ideas? Why not give a seagrass meadow this Christmas?

This designer is making clothes out of human hair