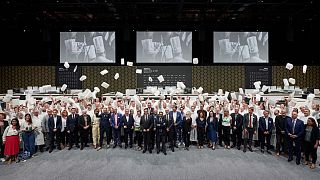 France's Davy Tissot has won the Bocuse d'Or, the world-famous chef championships, held this year in the gastronomic city of Lyon. Tissot and his team pipped silver medallist Denmark's Ronni Mortensen to the title, with Norway's Christian Andre Pettersen also stepping up to the podium in third.

Chefs from all over the world have been testing their skills across disciplines and against the clock in the culmination of 2 years hard training for this most prestigious of events. And the finalists, representing 21 countries, put their skills to the test across two main disciplines amongst a phalanx of screaming supports armed with flags, whistles and cowbells. This is a place where careers are made, where tradition meets craftsmanship, and the level of workmanship demonstrated over the past 48 hours has been staggering.

"Whatever the result, it's a big accomplishment just to be here," said Jerome Bocuse, the competition's president. And he's not wrong, but there can only be one winner, and this year it's the hosts, France.

In 2004, he obtained the Meilleur Ouvrier de France distinction and joined Les Terrasses at La Villa Florentine where he obtained 1 Michelin-star. In 2016, hebegan a new challenge at the Saisons Restaurant just outside Lyon and obtained a Michelin star.

Outside of the big three, there are further prizes are awarded by the I.O.C. to the candidates who obtained the best marks in the "platter" -- won by Iceland - and "take away" test --Sweden were announced the inaugural winners of this prize-- with the exception of the three winners.

The title of best commis chef was awarded to Switzerand's Manuel Hofer.

After the result, Euronews spoke to Arthur Debray, the 23-year-old commis chef in the winning French team. His face is a mixture of stunned elation and wonder, clearly caught in dual headlights as his awareness of both his infancy in the industry and the magnitude of the achievement hit him.

"I have no words to describe how I feel," he says, his whole demeanour betraying a serious shock to the system. "But I want to thanks all the chefs that have helped me and given me advice along the way."

When asked what the most difficult part of the process was for him, I expected him to tell me about some element of technical cooking but, perhaps even more interestingly, he answered, "the pressure."

"I may just be a commis but there were two candidates in the box. It's difficult when you are young to concentrate with all these famous judges and chefs in front of you, plus a really incredible crowd."

This is the culmination of two years' work with Davy Tissot for the Bocuse d'Or, and now he is waiting to see where his success takes him. But he's thinking it might be to the north of Europe now he's been inspired by the teams that shared the podium with him.

"France has the most beatiful cuisine in the world but maybe I'd like to work in Denmark or Norway," he says. "I'd like to think that one day it will be my Bocuse d'Or."

I wouldn't bet against him.

New for 2021 - a takeaway tribute to food under lockdown

This year, in order to test a chef's ability to adapt to a world turned upside down by the health crisis, the 2021 edition features a takeaway test. Indeed the whole show paid tribute to those who have managed to pull through an impossible time for the industry, and a hope of welcoming back in the near future those who have lost their businesses due to the lockdown.

A starter / main course / dessert declination of the cherry tomato and shrimp is the stipulation here.

But, more than that, the team must make their own takeaway box themselves, and following specific rules.

The much-lauded Geranium restaurant in Copenhagen boasts two finalists at the 2021 Bocuse d'Or. And they are firmly in separate kitchens for this event.

As a 16-year-old he was already a commis chef under Rasmus Kofoed (still his boss at Geranium and cheering him on as his coach in Lyon 2021) when Denmark also took the silver medal in the 2007 competition.

The main platter test this year asks the chefs to work with beef chuck. A cut of beef that is hardly used in Denmark. I ask him if he recoiled in horror when he found out.

"Basically, yes!" Mortensen admitted. "It's not a piece that we normally use in the whole of Denmark but once you get your fingers into it, it's ok."

On the subject of his teammate at Geranium, Artur Kazaritski, now competing against him for Estonia, Mortensen is as chilled as Gazpacho.

"It's fine," he tells Euronews. "Of course we try to sabotage him, but in a funny way. We have a good relationship and he's doing what he's doing in another kitchen."

There's a healthy rivalry and equally healthy respect between the two chefs. "If they're missing a piece of meat or something that didn't arrive, we will help them out."

President of the organising committee, Régis Marcon, makes the case for the choice of platter.

"We have chosen a simple and cheap dish, but which, in our eyes as cooks, remains noble: the beef chuck. It will allow us, through the imposed braising, to better evaluate the cook's techniques."

During a speech just before the winners were announced, Marcon also paid tribute to those countries whose teams could not make the competition due to health issues or restrictions.

The judging is rigorous. You have a tasting jury and a kitchen jury.

The former will evaluate the visual aspect of the tray, the team's work on the beef chuck as well as the garnishes they choose to employ. They will also adjudicate on use of the "traditional" element in the "stew" dish they have to present. And finally the quality of the sauce.

The latter will comment on work on the beef in the kitchen, which pays attention to the technical difficulties of the piece. They will also assess the hygiene applied to the products, equipment, and general state of the cooking station. The distribution of tasks between chefs and commis is evaluated, as is the level, if any, of food wastage.

Kitchen judges must also check that the rules are being adhered to, and that there is no use of prohibited materials or equipment.