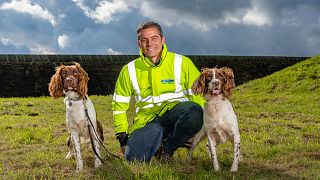 When we think of dogs with jobs, we tend to imagine good boys in blue – patrolling airports, festival entrances, train stations. Sniffing out signs of human transgression, keeping us in line.

But a new pack of “green” graduates are proving that dogs can have a significant impact in the environmental sector too. With a sense of smell at least 10,000 times sharper than ours, dogs have a special power in the field of conservation.

In the UK, water leak detection specialists CAPE SPC are successfully using springer spaniels to sniff out leakages in rural areas, by “targeting” them to the scent of chlorinated water.

Co-director and handler Luke Jones, 29, first started working with dogs when he joined the military at 18 years old, relying on them to smell buried explosives in Afghanistan.

“A lot of people think that dogs only work with the police or the military and they only do drugs or explosives, but there’s a lot more capabilities out there that dogs can be used for,” Jones said.

He embarked on a new path with CAPE director Ross Stephenson in 2016. They’ve made huge savings for their main contractor United Utilities, finding over 100 burst pipes since 2019.

Across England and Wales, almost 3 billion litres of water is lost every day. It’s no wonder water companies are open to suggestions. Yorkshire Water is the latest to pilot the canine/human team, unleashing spaniels Denzel and Kilo along its northern pipeline.

The company is seeking to reduce leakage by 15 per cent in the next five years. And whilst they’re quick to stress that a range of more high tech measures are in place (like acoustic devices, satellites, a smart water network) it’s clear that the dogs’ employment goes far beyond a PR stunt.

Jones and Stephenson were inspired to enter the field after seeing the Water Corporation in Western Australia trial a similar thing, led by pioneering dog trainer Steve Austin.

The 67-year-old is a powerhouse of canine wisdom, a one man university who has trained dogs for all kinds of environmental pursuits. From protecting rare birds (like the Plains-wanderer) and green turtle eggs, to exterminating rats from subantarctic Macquarie Island (the dogs are commemorated in a stamp set) and catching out wildlife poachers.

“I think it all started for me when we were asked to tackle Hawkweed,” Austin said, referring to a highly invasive, small and seemingly odourless weed.

“Long story short - the dogs found it a metre under snow.”

What’s the secret to training a dog so precisely?

“It involves getting a good dog. I can’t tell you how important that is. And it must have a high hunt drive,” Austin says, explaining the difference between prey and hunt drive: the latter he calls that “ever-wanting to find something no matter what” (even an out-of-sight) target.

Working cockers and springer spaniels from England are second to none. Austin takes care to use “positive reinforcement” and “negative punishment”, letting the dog choose their own reward, and merely removing it when they make a mistake. Otherwise doubt creeps in, “you never want the dog to think should I or shouldn’t I… is it worth it?”

Lastly, a good dog handler is crucial. “I always say to my handlers, your mind is like a parachute, if it doesn’t open, it’s not going to work.”

In his groundbreaking book Are We Smart Enough To Know How Smart Animals Are, the Dutch biologist Frans De Waal lays out the pitfalls that come from human exceptionalism and the leaps in understanding when we meet animals in their own worlds.

“The more we succeed, the more we discover a landscape dotted with magic wells,” he writes.

One of the biggest assets to working with dogs on environmental problems is that they don’t experience the world like us. They don’t, for instance, read maps. Something that came in handy when a dog was able to locate a burst pipe for the Water Corporation which was wrongly marked on the other side of the road.

'The scope for dogs is almost limitless'

As humans, we enjoy a special relationship with the dog. “Dogs eagerly pay attention to us and need little encouragement to work on the tasks that we present to them. No wonder “dognition” is an up-and-coming field,” De Waal wrote in 2016.

That connection makes professional dog services hugely rewarding and - though the job might sound dreamy to roughly half the population - exhausting.

At CAPE, Jones’s scent training is a layered process. It starts with “targeting” the dog to a single pot of chlorinated water, then getting them to understand you want more than just a pot, but the correct pot amongst a smorgasbord of distracting scents. Then applying that in the field where there's all sorts of enticing smells.

“A lot of people think that once the dog’s trained it’s trained, that it’s like a tool off the shelf. But the dogs need constant monitoring and training,” he said.

There’s exciting things on the horizon for CAPE, who have recently partnered with Thames Water, and for the use of dogs in conservation at large.

We haven’t even scratched the surface when it comes to using dogs in conservation, not even the surface.

Dr. Brian Hare, evolutionary anthropologist and dognition expert, says, “The scope for dogs is almost limitless - from detecting water leaks to Covid-19. In some cases they are more accurate and more dependable than technology.”

“Every time I think I know how good they can find scent, they blow you out of the water with some unbelievable find,” he said.

“We haven’t even scratched the surface when it comes to using dogs in conservation, not even the surface.”