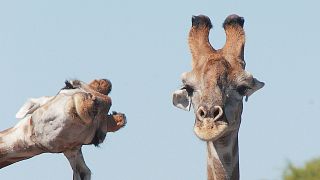 A turtle with attitude, puking penguins and a bird on a bad hair day - these are just some of the 44 finalists from the sixth annual Comedy Wildlife Photography Awards.

It hasn’t exactly been an easy year for anyone. With growing concerns about the future of our planet, smoke filled-skies turning orange across the US and environmental activists filling our streets, we could all do with a break from the onslaught of images filling us with dread.

What better way to give our brains a rest than the tried and tested internet phenomenon of funny animal photos. And these, according to experts in both photograph and comedy, are some of the best.

The photography awards had a record 7000 entries in 2020, despite many of us being stuck at home for months on end. There are usually only 40 finalists, but this year’s contributions were so good, there were four more images that the team couldn’t bring themselves to leave out.

A panel of in wildlife, photography and comedy professionals - including comedian Hugh Dennis, wildlife present Kate Humble and teenage climate activist Bella Lack, will be judging the pictures. The winners are to be announced on the 22nd of October.

The public will get a say too. By voting for your favourite photo on the Comedy Wildlife Photography Awards’ website, you can help decide who will win the People’s Choice Award.

The goal of the awards isn’t just to get you laughing out loud as you scroll through your news feed. The awards’ founders, Tom Sullam and Paul Joynson-Hicks are both professional wildlife photographers with a passion for conservation.

Sullam explains that their aim was to create a light-hearted way to engage people with conservation and build positive associations with the animals featured.

“The simple idea behind it all is that we strongly believe humour and positivity have a major role to play in building awareness, interest and eventually action towards protecting the animals that live on this planet,” Sullam says.

The team also works closely with competition partners, The Born Free Foundation, an organisation founded in 1984 to prevent the exploitation of both wild and captive animals.

“Over the years the competition has focussed more and more on the conservation, working with the Born Free Foundation and promoting conservation efforts around the world.”

How to be a conservationist at home

Alongside the photographic finalists, the Comedy Photography Awards has also released a list of things that you can do to become a “conservationist at home”.

They are trying to encourage people to continue with some of the things we had no choice but to do during the pandemic like shopping closer to home, flying less and turning our gardens or window boxes into a haven for bees.

Their list of recommendations also includes becoming a “wild influencer”. This means taking initiative in where you can to start the conversation about protecting the environment with friends, family or work colleagues.

“Every single thing you do matters,” they say, from holding members of your local government accountable for their environmental actions to bringing some more eco-friendly practices into the place where you work; “You have a voice, we all do, use it and don’t be afraid.”