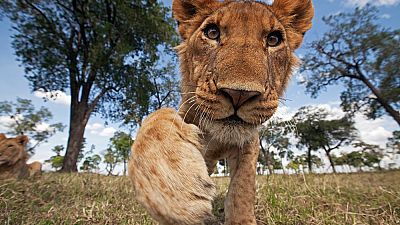 Conservationists in Kenya are using unique whisker spot patterns to help carry out the first nationwide survey of lion populations.

The pattern on a lion’s whiskers is as distinctive as a human fingerprint. By photographing them up close, conservation teams are creating a database that will keep track of numbers and also provide valuable information about the movements of the animals. It is the biggest survey of its kind ever conducted on lions.

“Lions are really struggling,” says Dr Jenny Cousins, Regional Africa Conservation Manager at WWF UK, in a press release. “They have already disappeared from over 90% of their historic range and are locally extinct in 26 African countries.”

These majestic big cats roam over hundreds of square kilometres to find prey and play a vital role in the local ecosystem. They control the numbers of grazing animals which stops species from going extinct by reducing the competition for food. Keeping the animals in check also prevents grasslands from being overgrazed which means they stay healthy and biodiverse.

Shrinking territories, however, mean that conflict between humans and lions is increasing. The cats are killed using spearing or poisoning, often wiping out whole prides. Cheaply available poison can also pose a threat to other animals in the local environment.

The IUCN says that lion populations are decreasing, with a 43 per cent drop in numbers between 1993 and 2014. They are currently listed as vulnerable but much more information is needed about how and where they are living to get a full picture of the threats they face.

Vital research necessary to save lions

Historically for tribes like the Maasai, killing a lion has been a part of initiation into manhood. As communities start to recognise the value that the predators have in the environment, perceptions are changing and people are better able to live alongside the lions.

“We’ve come to realise that these animals generate a lot of income from tourism, and that partners such as WWF support our community development because of such animals,” says John, a Maasai pastoralist from Narok County in south west Kenya. “So even if a lion kills my livestock, now I just scare them away. I understand the value of these animals and I would prefer to preserve them not only for the present but for the next generation.”

But not enough is known about populations in Kenya to put vital conservation plans into place. Estimates from 2008 recorded 2,000 lions living in the country but this relied on rough guesses and surveys that didn’t use standardised scientific methods. In combination with interviews from local experts and other field techniques, photographing the lions’ whisker patterns will build a better picture of whether conservation efforts are working.

So far surveys have been completed with the support of WWF in the south of Kenya, including in Nairobi National Park and the Maasai Mara Ecosystem. According to Dr Cousins, while initial census results look good, numbers in some areas are lower than expected.