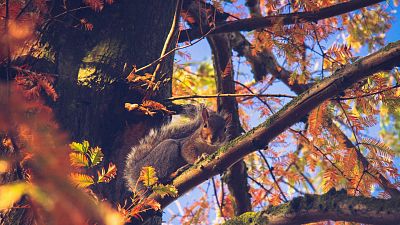 Manchester was my first nature reserve. My dog was my assistant, finding hedgehogs in the park and frogs in the back garden. Working as a translator specialising in zoology, I moved cities often, first to Cambridge and then to Bologna. In Cambridge, I would see bats on my walk home from work and even passed iguanas on the side of busy streets in biodiverse Colombia.

With British towns teeming with wildlife, I started to realise that becoming an urban naturalist has never been easier – and anyone can do it. Mental health experts have shown that spending time in nature can be extremely positive for our wellbeing and it gets us away from the daily stress and pressures of city lifestyle.

Crucially, the more of us take an interest in the wildlife in our cities, the more local government will have to plan with animals in mind. We’ll demand cleaner waterways, more trees and larger green spaces. Bricks can be modified into homes for migratory swifts and insects can benefit too. For instance, tree bumblebees that have moved through Europe into the UK, are currently nesting in a bird box in my garden.

Fascinating, charismatic species can be found right next to where you live. By taking an interest in our local ecosystems, learning about the species that surround us, and preserving our most biodiverse regions, we can ensure a sustainable future for all city-dwellers. The first step is to get outside and look.

Here are my top tips for how to become an urban naturalist.

Look for these star species

Many of Europe’s cities are full of parrots. These recent arrivals are the most northerly species in the world, at home in Glasgow and the squares of Barcelona.

Flocks of thirty birds, all a brilliant green, are a common sight in our parks. To anyone who thinks British birds are dull, think again.

These apex predators are just as happy to nest on sea cliffs as they are Manchester Town Hall. A peregrine can fly at 108 metres per second, which is 242 miles an hour to you and me.

That’s twice as fast as the top speed of a cheetah. But with webcams and RSPB viewing stations now all around the UK, they’ve never been so visible.

Up in Scotland, a great place to look is Edinburgh’s Union Canal. Otter have been spotted numerous times in 2020, the videos are all over Facebook to prove it.

Or if you live in East London, you can spot fallow deer as they feed on city streets. And I won’t hear a word against urban foxes, in many countries, these are elusive animals. We’re lucky to have them rooting in our bins.

Team up with other urban naturalists

Social Media accounts like London Bird Club on Twitter offer daily reports of animal sightings, with experts only a message away. Never again will you miss a superstar in your city. Naturalist slang for animals like these tends to be a ‘mega’, which could be a beluga whale in the Thames.

Sightings this year include swordfish off the coast of Edinburgh and albatross near Hull.

Then there's Naturalist Groups you can join, where you can learn your trade as an urban naturalist. Many of these, like The British Ornithology Trust’s Young Birders’ Blog, aim to bring newcomers together.

And the equality campaigns of naturalists like Sorrel Lyall, as well as celebrations such as Black Birders Week, aim to ensure that no demographic is excluded.

Make sure you bring binoculars.

Most animals are skittish around people, and with the exception of grey squirrels, you’ll need some way of spotting them. Good thing that binoculars can be rented at most of Britain’s nature reserves, including the London Wetland Centre. It’s the best way to watch birds on a budget.

You will also need a wildlife guide. The RSPB has an excellent guide to all of Britain’s birds, available for free on their website. iNaturalist is also super useful, featuring photos of the animals in all Europe’s major cities. And if you spot something you don’t recognise, post a picture to your local Twitter groups. The wildlife-watching community will be glad to help you out.

Wear the right clothes. Waterproofs are a must. Animals don’t mind the rain as much as people, but they don’t tend to like bright colours. Instead, choose dark and natural tones. Except in high summer, bring something warm. And don’t forget accessories: thermos, gloves, notepad.

Use hides. Hides are walk-in viewing shelters, the best spots on urban nature reserves. Here you’ll find local experts who, perched with a mug of coffee in hand, have been out since dawn. These people are the reason I saw my first kingfisher – they have so much insider knowledge. Ask them what they’ve found!

Bring your friends. Whenever I can, I go looking for birds with family and friends. It’s always a joy to find new animals in the city, whether it’s a jay, a pink crow, or the waxwing - a sparrow sized bird with a punk hairdo. Two pairs of eyes make it more likely you’ll find what you’re looking for!