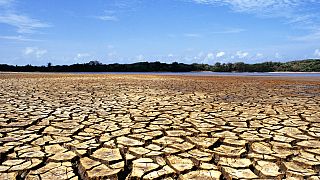 Landscape of a dry, cracked soil with water and vegetation in the background in Ilha do Caju, state of Maranhão, Brazil.   -   Copyright  Adriano Gambarini / WWF-Brazil
By Rosie Frost  •  Updated: 10/09/2020

Two-thirds of global populations of mammals, birds, amphibians, reptiles and fish have been lost on average since 1970, according to a new report from WWF.

The conservation organisation says that environmental destruction - caused by deforestation, unsustainable agriculture and the illegal wildlife trade, is a leading factor in the decline.

Published today, the Living Planet 2020 report is a comprehensive look at the state of our natural world. It tracks how well global wildlife is doing based on information from 125 experts around the world. Almost 21,000 populations of more than 4,000 species were tracked between 1970 and 2016.

These serious declines in wildlife species populations are an indicator that nature is unravelling and that our planet is flashing red warning signs of systems failure.

Pioneering computer modelling included in the report predicts that if we maintain “business as usual” irreversible losses to biodiversity will continue. It could put the ecosystems that we all rely on to live in danger.

“The Living Planet Report 2020 underlines how humanity’s increasing destruction of nature is having catastrophic impacts not only on wildlife populations but also on human health and all aspects of our lives,” said Marco Lambertini, Director General of WWF.

“We can’t ignore the evidence – these serious declines in wildlife species populations are an indicator that nature is unravelling and that our planet is flashing red warning signs of systems failure.”

Changing the way we deal with nature

The modelling also found, however, that if bolder, more ambitious conservation efforts are embraced, alongside transforming the way we produce and consume food, then biodiversity loss could be stabilised or potentially reversed by as early as 2030.

“Essentially, the aspiration is to fundamentally change the way that we deal with the loss of nature,” Mike Barrett, Executive Director of Conservation and Science at WWF-UK tells Euronews Living. “For far too long, it's been implicitly accepted by humanity that the best we can do is to somehow gently manage the slow decline of nature.”

Instead of an isolated approach that focuses on just conservation, the report shows that making our food systems more sustainable and removing deforestation from supply chains could reverse losses in biodiversity by 2030.

But Barrett says that it needs to be a collaborative global effort.

If I were to look at it from the UK or European perspective, we have essentially decimated wildlife and nature in all parts of the world.

“At the moment, all the obligations in international groups tend to relate to the way that countries behave within their own borders. No countries are held to account in the way that their activities impact the rest of the world.

“If I were to look at it from the UK or European perspective, we have essentially decimated wildlife and nature in all parts of the world.”

He explains that a crucial first step is to get rid of products that are leading to deforestation and habitat loss in other parts of the world so that we are “properly taking responsibility for our actions.”

In the past, these countries have seen throwing money at nature’s problems and expecting lower income countries to take action to protect their natural resources as a solution, Barrett says.

“If we can't get countries to take responsibility for the footprints of their consumption, then we're not going to be able to tackle the problems in the way that we all need.”

The timing of the report is crucial. Next week the United Nations General Assembly (UNGA) will be discussing biodiversity loss as part of its programme. World leaders are expected to review the progress that has been made on a number of environmental targets including the Paris Agreement and the UN Sustainable Development Goals.

The report’s authors are hoping that their findings will help them to secure a New Deal for Nature and People. The deal, an idea proposed by a number of conservation NGOs and backed by the World Economic Forum, would create a global commitment to protecting and restoring nature. It would work in a similar way to the 2015 Paris Agreement and is being proposed as the key to ensuring the long-term survival of nature.

“This is a new deal for nature and people. And that's crucial. We have to recognise that we're talking about the Earth's life support system,” Barret emphasises.

A New Deal would involve trying to ensure collaborative efforts to reach a zero-carbon world as soon as possible. It would also get the countries driving environmental degradation to take responsibility for their global international footprints instead of just taking action within their own borders.

“What our leaders can't do is to say they didn't know, because the evidence is there,” says Barret. “We know what's driving the loss of nature across the planet, we know it has to stop and we know it can be reversed.”