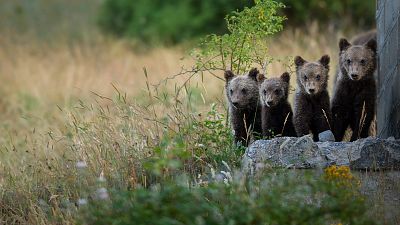 When the world went into lockdown, wildlife took advantage of the lack of human activity and began to creep back into our towns and cities. Dolphins returned to the Bosphorus Straits in Turkey and Kashmiri goats took over the seaside town of Llandudno in Wales.

In areas normally inundated by tourists, nature was reclaiming space to thrive.

Now, in an effort to replicate the effects of lockdown, Thailand’s Department of National Parks, Wildlife and Plant Conservation (DNP) has announced plans to introduce annual, temporary closures of the parks.

Thanya Netithammakun, DNP Director-General, told the Bangkok Post in May, "the absence of tourists leads to wildlife recovery." But is this a perspective shared in Europe?

Is wildlife returning to parks in Europe?

In Italy, low levels of human activity have also provided respite for one enigmatic creature. Less than 200km east of Rome, the Parco Nazionale d’Abruzzo, Lazio e Molise is home to the Marsican brown bear, a critically endangered species with a population of only 50-60 known individuals.

Stephano Orlandini, President of Salviamo l’Orso, a Marsican bear conservation association, says that because “it is always a very delicate balance between people that inhabit the this area and the wildlife [lockdown] has been wonderful for bears and wonderful for all our protected areas” in Abruzzo.

Not only have animals been more active during daytime hours, the absence of traffic has removed the risk of roadkill accidents. Ordinarily, traffic threatens bears because even one individual killed by a car can devastate such a small population, especially if it was a female of breeding age.

In light of these positive impacts, Orlandini says he would welcome the idea of temporary closures to the National Park. He does, however, recognise that with tourism contributing 13 percent of Italy’s GDP, it could prove difficult to introduce.

Anecdotal evidence suggests birds and deer have been nearer to footpaths and roads during lockdown, but new distribution doesn’t necessarily indicate a wildlife resurgence. “Separating a good year due to less disturbance from a good year due to better weather or other influences is very difficult,” a spokesperson from the CNPA tells Euronews Living.

Without hard data, the authority says, it isn’t easy to attribute the changes to the absence of tourists.

The CNPA also adds that it does not consider temporary closures necessary because other measures exist to protect wildlife while encouraging people to enjoy the National Park. Spatial planning of path provision, closed access at sensitive sites, and educating visitors on responsible behaviour are all measures they use to help tourists and nature to coexist.

Research from the European Travel Commission (ETC) found nature and outdoors experience “was one of the fastest growing niches of the tourism industry prior to the pandemic and it is likely to continue growing in its aftermath”. As nature tourism continues to see a boom, it will become increasingly necessary to bring in measures like those seen in the Cairngorms National Park.

In June, the ETC launched a media campaign “We Are Europe” to inspire sustainable travel experiences. The campaign is centred on European nature, culture, history and heritage as key passion points to attract the long-haul market. The aim is to spread tourism flows more evenly across the continent and, with regard to nature, ETC is guided by “Slow Adventure” principles: journeying through nature at an immersive, responsible pace.

Back in the Cairngorms, keen to learn from the lockdown experience, the CNPA is making strides to ensure tourism, which accounts for 30 per cent of the region’s economy and 43 per cent of employment, is made sustainable. Education of visitors is high priority and infrastructure changes, such as closing dead end roads to private cars and providing public transport instead, are under consideration.

Earlier this year, a Green Recovery Plan was agreed upon to protect and replenish the natural and social capital of the National Park, in alignment with the Scottish Government’s aim to deliver a green recovery. The CNPA also created a video which encourages responsible behaviour in the National Park.

Tourism can also work hand-in-hand with conservation. The European Nature Trust (TENT) partners with conservation foundations, including Salviamo l’Orso, to organise wild travel experiences that connect people with nature and raise funds for wildlife projects. Guided by ecologists and wildlife experts, visitors are immersed in nature with the hope that they are inspired to protect the environments they experience.

Aware that people tend to hang out on the fringes of National Parks when hiking, TENT founder Paul Lister, says it’s good if people want to explore deeper, provided they “must take everything they took in [to the park] out again.”

In Romania TENT supports Foundation Conservation Carpathia (FCC) which works to conserve a 200,000ha area of wilderness. Called the European Yellowstone by the FCC, it is home to wildlife like lynx, bison, and bears.

We’ve changed perception so bears, rather than being a nuisance, can be first of all something to be proud of and secondly a driver for the economy.

The FCC encourages tourism to invest in the region’s economy and challenge the biggest threat to wildlife, exploitative logging. By rooting ownership of tourism’s economic benefits in the local communities, it incentivises conservation of the ecosystem.

This is a sentiment echoed in the work of Salviamo l’Orso. It engages with local residents on the importance of Mariscan bears to promote coexistence, a strategy that has been aided by nature-lovers visiting as tourists. As Orlandini explains, “we’ve changed perception so bears, rather than being a nuisance, can be first of all something to be proud of and secondly a driver for the economy.”

Similarly, the John Muir Trust, a charity in Scotland that defends and connects people with wild places, wants us to get back into nature because physical engagement fosters responsibility for the land. As the Trust’s Ben Nevis ranger, Nathan Berrie, says “the best thing for recreational management and conservation is just going out and chatting to folk and having a good time” in nature.

Instead of introducing closures, parks authorities, conservationists and tourism bodies seem largely in agreement: the more people we engage with the value of nature and our existential dependence upon it, the better chance we have to preserve it in the long-run.